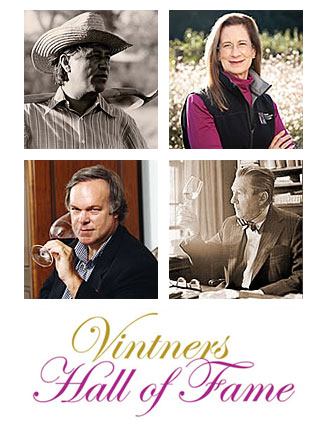 What do the world’s most influential wine critic and one of America’s foremost community organizers have in common? As of Monday night, they are both members of the Vintner’s Hall of Fame at the Culinary Institute of America in St. Helena, California.

Robert M. Parker, Jr. and Cesar Chavez, along with winemaker Merry Edwards and writer Frank Schoonmaker, were honored at an induction ceremony where they joined forty other luminaries from two centuries of California wine history.

The Vintners Hall of fame was founded in 2007 by the Culinary Institute of America as a way of honoring the men and women who have had the most impact on the California wine industry. Modeled loosely on the Baseball Hall of Fame, each year a nominating committee, of which I am a member, selects a ballot of several potential members who are then voted on by more than 75 national wine writers, critics, and historians, as well as any living members of the Hall.

I consider it a point of personal pride that this year’s inductees included Parker and Chavez, as I have long advocated for their candidacy in this institution. They have both had monumental impacts on the modern California wine industry, and very much deserve this honor.

Likewise, winemaker Merry Edwards, a pioneering woman in a field of mostly men when she began, has helped define California Pinot Noir for more than forty years. Frank Schoonmaker, for his part, was one of the earliest proponents of California wine, and perhaps the country’s earliest and foremost champion of labeling wines with varietal and specific geographic origins, rather than the common practice at the time of labeling wines with old world references such as Chianti, Chablis, and Burgundy.

A poised young grandson Anthony Chavez gave a moving acceptance speech on behalf of his grandfather, highlighting many aspects of Chavez’s career and calling that painted an inspiring picture of a truly remarkable man.

For many attending the ceremony, the highlight of the evening was going to be hearing Robert Parker accept his award in person.

Unfortunately Parker had to cancel at the last minute, as a result of throwing out his back. He made his acceptance by pre-recorded video. Here’s my spotty attempt at a transcript of his remarks for your reading pleasure:

“I’m sorry I’m not there person. I twisted my back, and now I’m under a regimen of acupuncture, massage, and chiropractors to try to get to the point that I can navigate airports, but I didn’t get better in time to make it to this event. It’s a very special day for me, and I apologize for not being there in person.

Firstly, I know Park Smith is there and I asked him to introduce me. I haven’t heard what he said when I’m recording this this, but Park, you’re an older brother to me and have always been so full of wisdom and advice, and you also have the greatest wine cellar I have ever seen in my life. Thank you.

Secondly, this is a special occasion. A humbling occasion. I never once in my life believed I’d be eligible to be part of an institution like this. I thank everyone one the nominating committee, and everyone who voted for me. I’ve been reminded many times that I’ve been a controversial choice to be in the [Vintners] Hall of Fame.

I want to say that when I first went to California in the late 1970s and early 1980s I was skeptical. Of course there were great historical wines that had been made, like Inglenook and Mayacamas. I was disappointed and frustrated in many of the wines I tasted. Not only from Napa and Sonoma, but also from Santa Barbara, the Santa Cruz Mountains, and more. I saw California as truly a Shangri-La for wine growing, and that frustration early on was about the region living up to its potential. Too few people were making great wine.

Now, of course, all that skepticism has turned into very bullish advocacy. I have today an enormous amount of respect for what California has accomplished, and it has given me a great deal of pride as an American, a great deal of joy as a wine drinker, and just overall a lot of great excitement. California has inspired me. I’m not sure if it’s just coincidence or good luck, really, that my career has spanned the development of Napa as a world class wine region. I’ve been the beneficiary of the proliferation of these high quality wines, higher in quality than I ever dreamed. And I’m happy to have played some part in that process.

I realize I’m the first critic to go onto the Hall of Fame, and proud of the acknowledgement. Critics do play a role, but we are one basic component of a much larger picture. The most important thing, of course, is the land and the climate, the terroir if you will. Then there’s the people that are involved, the young visionaries that start with great aspirations, and follow through with the commitment and the execution. These are all much more important than what I do. But I think that if there’s a role of the wine critic in this picture, it’s about helping to get the message out

I’ve been lucky to have found something in life that I’ve loved to do. I realize I’m the first wine critic here, but I hope I’m not the last. I hope others have a chance to be recognized for their efforts and contributions.

I accept this award today with humility, gratitude, and satisfaction. It’s thrilling to me, and so frustrating not to be there in person. I also accept this award on behalf of the vignerons, the winemakers and winegrowers who have taken all the risk. My wife is not here as I record this, but I also want to thank her. She’s been with me every step of the way. We’ve been married now 44 years this July.

To all the California winemakers, to the nominating committee, and to all of you attending, I’m touched by being admitted, and hope that everything I do from this day forward will justify your confidence in me. Thank you.”

Parker’s induction comes on the heels of some significant changes in his career and business, and only days after the announcement that critic Antonio Galloni, long thought to be his heir-apparent, would be departing to start a rival publication.

Galloni was responsible for perhaps close to 30 percent of the Wine Advocate’s coverage, including reviews of California wine, a responsibility he inherited from Parker less than two years ago.

The irony of Parker’s induction into the Hall of Fame at a time when his publication’s coverage of the state seems uncertain was not lost on the attendees, and fueled much of the cocktail conversation prior to the event.

While Parker has insisted both publicly and privately to his online subscribers that he is not retiring, Parker’s induction seems nicely timed to coincide with what most read as his initial steps towards a minimized involvement with the publication, and an eventual handing of the reins over to his contributors.

In the meantime, however, like Michael Jordan’s brief return to the NBA, Parker may have to pinch hit as California reviewer one more time, at least until he can sign up the promised “brilliant new writers” that will apparently be added to the staff of the Wine Advocate in the near future.

No matter what happens with the Wine Advocate, however, Parker is now in good company in the Vintners Hall of Fame, and quite deservedly so.