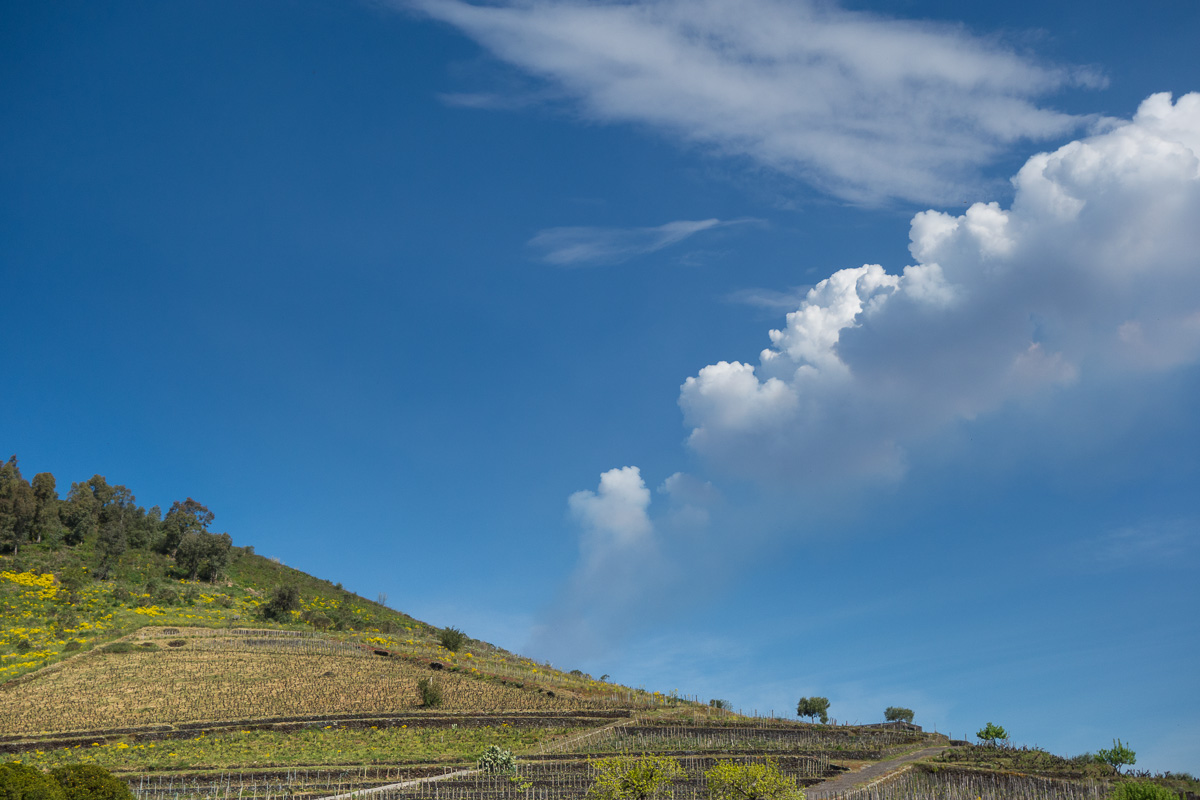 Few places so viscerally evoke their terroir as do the vineyards on the slopes of Mount Etna in Sicily. Especially when the mountain booms ominously, belching lava, smoke, and ash thousands of feet into the air above. Standing in the black soils from which gnarled 100-year-old vines reach like arthritic hands while fine bits of pulverized volcanic rock drift down from the sky, to add a few more powdery grains to the fine-grained soil at your feet, you can all but taste the terroir. You certainly can smell it, a faint flinty brimstone tinged with sea air.

Standing a few yards from a hulking lava flow, the impulse to grow grapes, let alone make your home, in the path of one of the world’s most active volcanos seems like so much madness, even today. It’s hard to imagine the inspiration or perhaps desperation of those who first tried, several millennia ago.

Grapes have been grown on the flanks of Mount Etna in Sicily probably ever since the first agricultural civilizations set foot on the island, which were certainly no later than the 8th century B.C. As evidenced by seals found on the clay storage vessels called amphorae which litter the ancient shipwrecks on the floor of the Mediterranean, Sicilian viticulture was extremely prosperous by the 2nd century B.C. and many Sicilian grape varieties were exported to the mainland of Italy where they became the basis for thriving winegrowing operations in cities like Pompeii and Etruria. 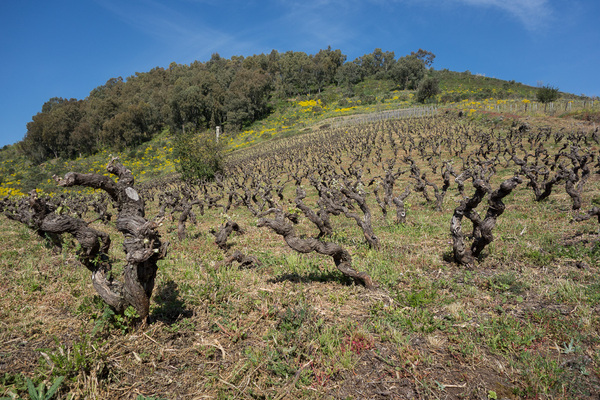 The slopes of Mount Etna, high above the ocean provide ideal conditions for grape growing: excellent sunlight; low rainfall; and shifts in temperature between day and night that favor slow complex flavor development in grapes. The soil, if you can call the all but lifeless powdered stone that sits in thin layers above hardened lava flows soil, drains extremely well, and causes the ancient grapevines to struggle mightily for both water and nutrients. 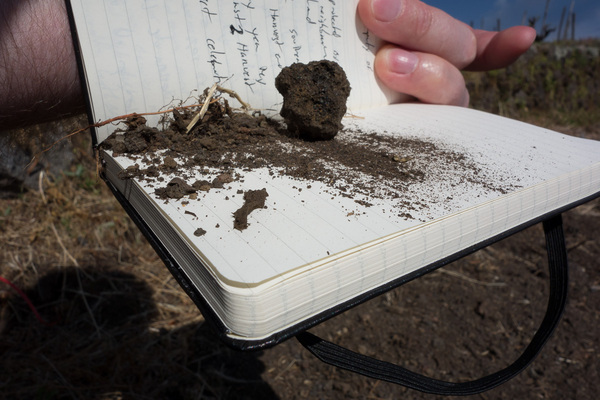 Etna can boast some of Europe’s oldest vines thanks to this soil that, in combination with the island’s slight remove into the Mediterranean, has never played host to the scourge of phylloxera.

The Benanti family has been caring for some of the islands oldest vines since Giuseppe Benanti took over his father’s farm and began expanding the grape acreage in the late 1890s. Across a century, the family passed both a name and the care of the vineyards from grandfather to father to son. Winemaking under the family’s name (rather than just selling grapes) was revived in the late 1980’s by Giuseppe Benanti (the 2nd), and he has been joined by his two sons Antonio and Salvino. Together they work the family’s vineyards on the southern slopes of the volcano, coaxing tiny amounts of fruit from densely packed rows of vines that are at least 80 years old on average, but some are much older.

The oldest vineyard sits at the top of a hill overlooking the winery, and was carefully guarded by the townspeople for many decades before it was taken up again by the Benanti family. These 100+ year-old Carricante and and Nerello Mascalese vines sit at about 450 meters of altitude on the southeast slopes of the volcano. This exposure means they tend to be warmer than the rest of Etna, leading Benanti to generally be the first to harvest grapes on the mountain each year. 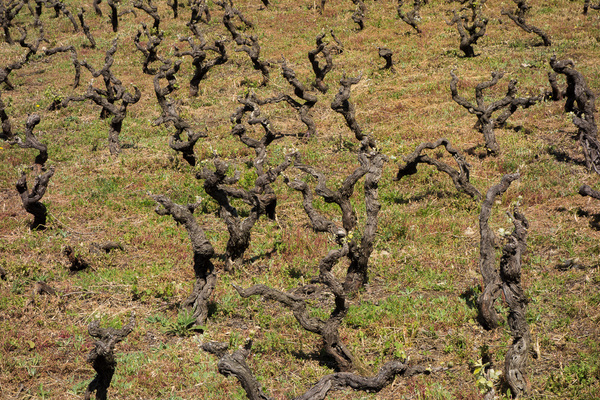 Most of the winery’s vines are head-trained in the ancient albarelo method, though the winery has experimented with trellising the vines, and most recently even with mechanically harvesting. The trellising seemed to work ok, but the mechanical harvesting was considered a bit of a bust.

In addition to their ancient vineyard holdings, the winery purchased a neighbors citrus orchard, and now has about 12 acres under vines in the little town of Villagrande where the winery sits. The winery also owns vineyards on the northern side of the mountain, in the area known as Rovitello, as well as elsewhere in Sicily. 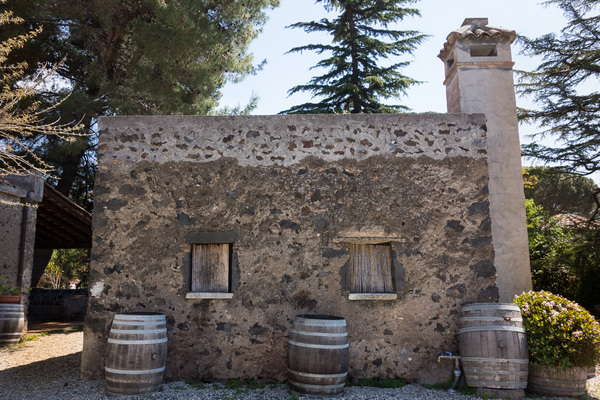 The wines are made in ancient stone buildings that adjoin the ancient palmento, or press house, that was used up until a few decades ago to make wine. Abandoned palmentos, with their giant wooden presses and multi-level stone tanks and drainage channels are one of Sicily’s most picturesque features.

The Benanti palmento and adjoining more “modern” winery sit on the property owned by a contessa in the 18th Century, whose existence is remembered by the winery’s flagship red wine, Serra della Contessa.

The winery is run primarily as a family affair, with the help of enologist Michele Bean, who recently took over from longtime winemaker Salvo Foti, and cellar master Enzo Cali, who was kind enough to show me around when I visited in April. 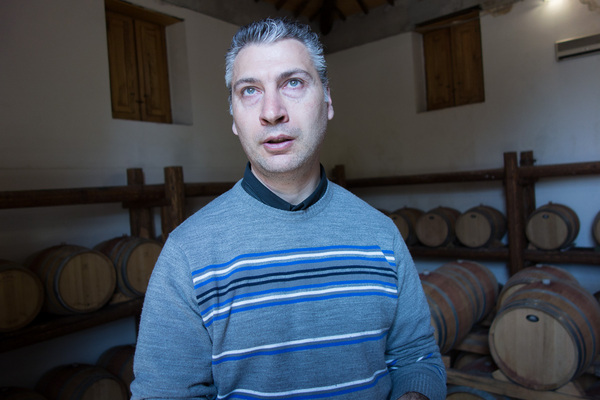 According to Cali, winemaking at Benanti is fairly simple, as it often is in Etna, having only recently migrated from palmento to cellar. The grapes are almost always destemmed completely and then fermented with native yeasts in steel tanks (for the whites) or large old oak vats (for the reds), then transferred to old oak barrels of varying sizes for aging. Benanti uses mostly two and three year-old French oak barrels.

Despite the winery’s small size (producing only about 10,000 cases each year), they are among the best known of Etna’s producers, thanks to being some of the earliest pioneers in Etna’s relatively short modern history of wine production. The fact that they make great wine might also have something to do with it.

The winery is best known for its white wine, Pietramarina, which is made from 100% old-vine Carricante, an indigenous Sicilian white grape, and their Serra della Contessa red wine made from Nerello Mascalese and Nerello Cappucio. 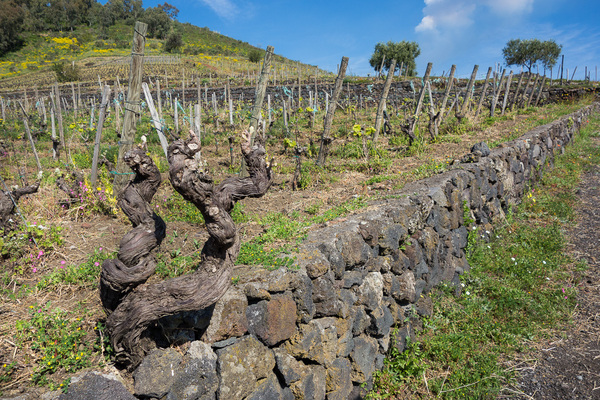 After tromping around the vineyards, I had a chance to sit down with Cali and taste through a bunch of the winery’s current releases, as well as some older wines that showed beautifully.

Benanti’s wines were among the first I tried from Sicily, and their Pietramarina was the first taste I had of the unique terroir of Etna more than five years ago. It electrified me then, and it still does today. 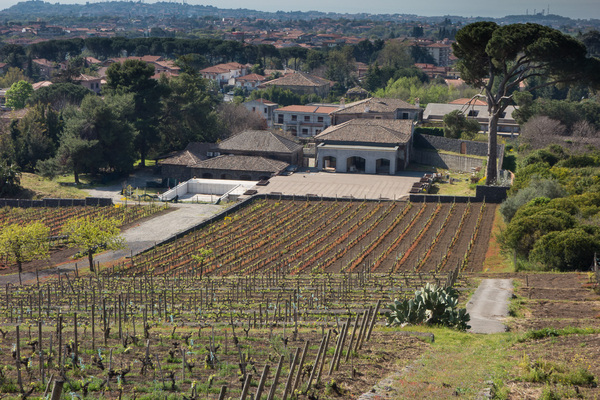 NV Benanti “Noblesse” Carricante, Etna, Sicily
Light gold in the glass, with medium bubbles, this wine smells of apple cider, wet chalkboard, and warm oats. In the mouth the mousse is spiky and angular, with a sharp effervescence. Flavors of ripe and baked apples mix with wet chalkboard notes. The only sparkling wine made from 100% Carricante in Sicily using the traditional methode champenoise. Aged for 2 years on the lees. Disgorged in 2012. 12.5% alcohol. Score: around 8. Cost: $60. click to buy.

2008 Benanti “Pietramarina” Carricante, Etna Bianco Superiore, Sicily
Pale gold in the glass with a hint of green, this wine smells of sea air, pine sap, and lemon oil. In the mouth, bright lemon oil, wet stones, unripe apples and a hint of yeastiness mix beautifully with bright acidity. Balanced and quite stony, with a wet cement quality that 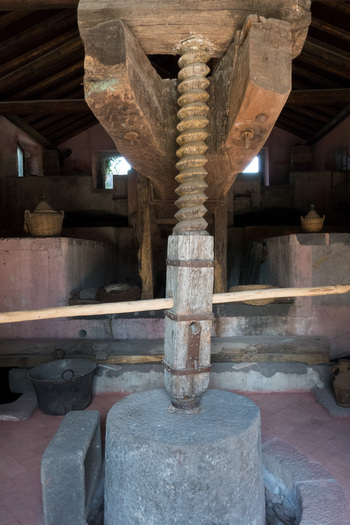 underlies its fruit. 13% alcohol. This wine is held in bottle for 3 or 4 years to allow it to develop before release. Made from grapes grown in the Milo area of Etna, which is the only zone that can be designated Etna Bianco Superiore. Score: around 9. Cost: $50. click to buy.

2005 Benanti “Il Monovitigno” Nerello Capuccio, Etna, Sicily
Light garnet in the glass, this wine smells of brown sugar, red apple skin, and mulberry. In the mouth bright mulberry and raspberry fruit flavors have a nice bounce to them. Very faint tannins, with a light powdery quality, take a back seat to the bright forest fruit, a hint of forest floor, and a touch of melted brown sugar. Delicious but simpler than when this grape is blended with Nerello Mascalese. 13% alcohol. Score: between 8.5 and 9. Cost: $36. click to buy.

2006 Benanti “Il Monovitigno” Nerello Mascalese, Etna, Sicily
Light ruby in the glass, this wine smells of forest floor, wet chalkboard, mulberry and a hint of black pepper. In the mouth, thick suede-like tannins wrap around a core of pure raspberry and mulberry fruit scented with pine duff and deep loamy earth. Stony minerality rumbles deep and resonant under the earth, while these forest floor aromas linger long in the finish. Made of 100% Nerello Mascalese. 14% alcohol. Score: between 9 and 9.5. Cost: $36. click to buy.

2005 Benanti “Rovitello” Red Blend, Etna, Sicily
Light ruby in the glass, this wine smells of a hint of farmyard, forest berries, and forest floor. In the mouth, juicy forest berries mix with forest floor and a hint of farmyard funk over deep minerality. Dusty tannins coat the mouth, as the wine finishes with caramel notes on top of the deep wet cement quality that pervades the wine. Made from old head-trained vineyards on the northern slopes of Etna. Ages for 2 years in old oak barrels, and then one year in bottle before release. 14% alcohol. Score: around9. Cost: $35. click to buy.

2006 Benanti “Serra Della Contessa” Red Blend, Etna, Sicily
Brilliant light ruby in the glass, this wine smells of crushed stones and wet chalkboard and the scent of fresh berries carried on the breeze. In the mouth the wine has the wonderful pulverized stone and cement character of Etna reds, with the beautiful floral and fresh forest raspberry, mulberry, and huckleberry flavors floating on top. The tannins are powdery and supple, but muscular. Fantastic acidity. 14% alcohol. Score: between 9 and 9.5. Cost: $40. click to buy.

2003 Benanti “Serra Della Contessa” Red Blend, Etna, Sicily
Brilliant light ruby in the glass, this wine smells like a mix of black olive, raspberries, mulberries and brown sugar. In the mouth, raspberry and mulberry fruit flavors are wrapped in supple, muscular tannins and seem filtered through wet cement. Notes of black olive and brown sugar float through the finish, along with cedar. Excellent acidity. 14% alcohol. Score: around 9. Cost: $40.

2000 Benanti “Serra Della Contessa” Red Blend, Etna, Sicily
Light ruby in the glass with only a hint of brick at the rim, this wine smells of black olive, forest floor and raspberry. In the mouth, gorgeous forest floor and raspberry flavors mix with wet earth and wet cement. Supple, muscular tannins have a firm grip on the fruit and the forest flavors, and the finish is long and gorgeous. Great acidity. Aging beautifully. 14% alcohol. Score: around 9.5. Cost: $40. 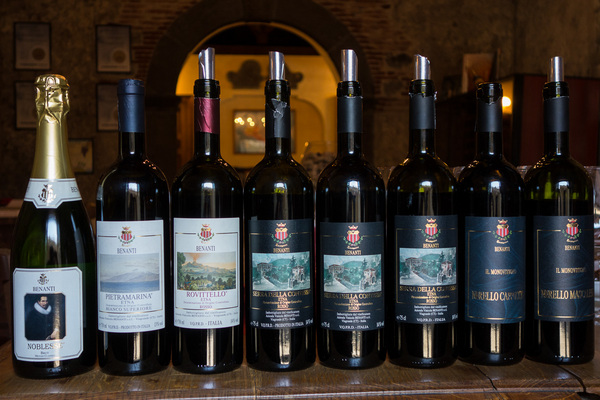