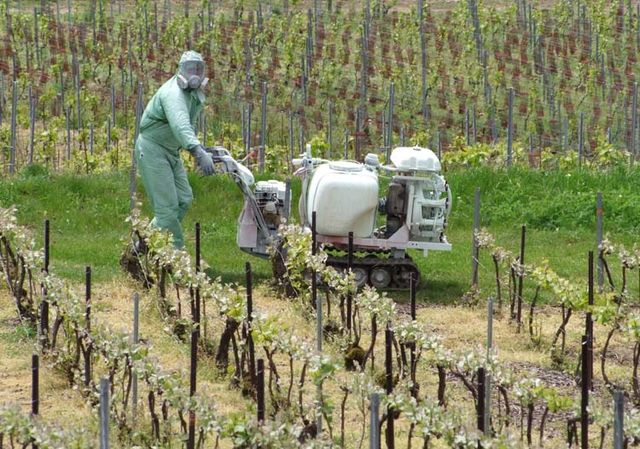 Anyone who has spent time in the vineyards of France has no doubt encountered the concept of lutte raisonnée, (literally “reasoned fight”) which effectively means “I’m not certified organic/biodynamic, and don’t intend to be because I’d prefer to use chemicals where and when I see fit, but sparingly, so I can respect the environment.”

Talking with some vintners, it’s clear that some of them really are essentially organic, and simply want the ability to attack a mildew infestation with something that doesn’t have a lot of copper in it (copper sulfate being seemingly the most hated organic fungicide thanks to long-term copper buildup in the soils).

But I’ve met my share of vintners whose use of the term seems more of an attempt to have their cake and eat it too — getting credit for being “sustainable” while not changing much of their standard viticulture regimen.

My friend Bertrand Celce, a fellow blogger and photographer whose Wine Terroirs web site is one of the longest running blogs around, posted something recently about a trip to Champagne that is worth reading. Bert is French, but blogs in English.

His article consists, essentially, of an exposé of the worst side of Champagne, the (high) yield-obsessed, chemical fueled, pump-and-dump viticulture that marred much of Champagne’s past, and apparently continues today.

For understandable reasons Bert hasn’t said specifically in whose vineyards he found such practices of dumping garbage (probably referred to as “compost” by the perpetrators) or the injection of iron chelate and urea phosphate to jump-start sugar production in the vines. Nor has he said specifically where this vineyard he visited is, though he maintains that it represents what one might find on a “random drive” through Champagne.

I haven’t been to Champagne personally, so I can’t comment based on my personal experience, but I can say how disgusted I was watching the video that Bert made of his walk through this vineyard. It’s certainly the most horrific vineyard I’ve ever seen at ground level, with bits of trash strewn between the pruned canes and zero signs of organic life in between what look like puncture holes in the earth made by the apparatus responsible for the red-stained iron chelate injections. It makes some of the famously “lifeless” soils of Burgundy look hale by comparison (the famous viticulture consultant Claude Bourguignon was quoted as saying there is more life in the sands of the Sahara than in the soils of Burgundy).

Champagne and Burgundy both suffer from similar challenges, thanks to famously cold, wet, and unstable weather. The resulting predilection for mildew and rot has generally made for liberal applications of chemical fungicides as well as petroleum-based fertilizers, herbicides, and more.

The history of cooperative viticulture in Champagne, in which growers were rewarded for high yields and little else, did much to encourage the liberal use of prophylactic chemical applications with some serious modern consequences, as the soil studies that Bert cites in his article clearly indicate.

If Bert is correct, however, it seems Champagne may be somewhat slow to get the message.

There are, of course, producers who are taking much better care of their vines than the proprietor Bert visited. But Champagne definitely lags far behind the rest of France and the world in adopting more sustainable farming practices.

“It’s the weather!” cry the winemakers of Champagne in their own defense. Some producers have even gone so far as to claim farming biodynamically is flat impossible in Champagne, even though a few of their compatriots are actively proving them wrong as we speak.

As someone who doesn’t have to farm grapes to make his living, I have a great deal of sympathy for the growers of Champagne, who are basically the equivalent of drug addicts that are confronting the likely fatal consequences of their habit, should it continue. It won’t be an easy transition, and some may not survive it.

But it is desperately needed, especially if what Bert encountered is indeed as widespread as he suggests.

Read Business as Usual in Champagne.

Image © Copyright 2013 / courtesy of Bertrand Celce. Hat tip to writer John Bonné who I believe alerted me to this post via a tweet.