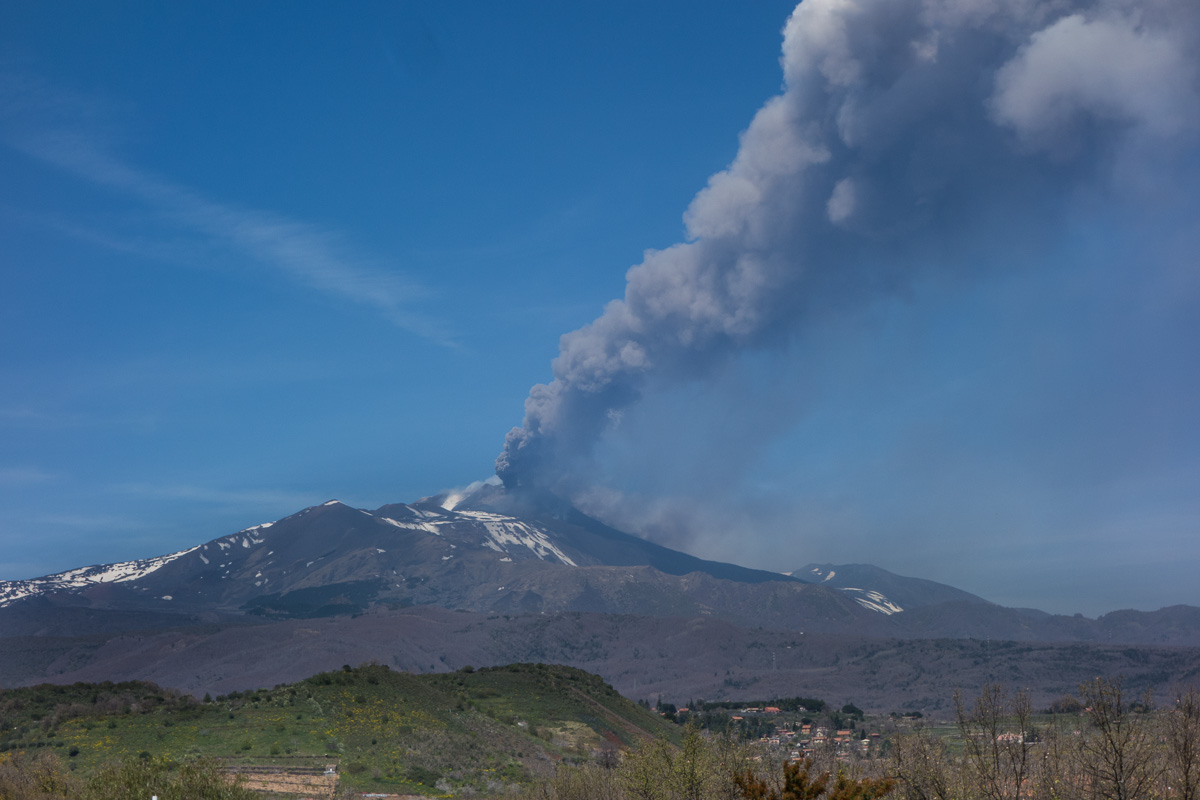 In the shadow of the fiery Mount Etna, five generations of men with the last name Nicosia, some with the first name Francesco, some with the first name Carmelo have been shepherding Sicilian wine to greatness. The first Nicosia that anyone talks about was Francesco, who in 1898 began a wine trading business in the little town of Trecastagni to capitalize on the world’s voracious appetite for Bordeaux.

And what might Sicily have to do with Bordeaux in the 19th Century? Simple. Far more bottles of “Bordeaux” were being sold than could be produced in the region in the late 19th Century. So the wine had to come from somewhere.

And one of those somewheres was the slopes of Mount Etna in Sicily, which at the time grew everything from Cabernet to Pinot Noir, much of which made its way by ship to France. 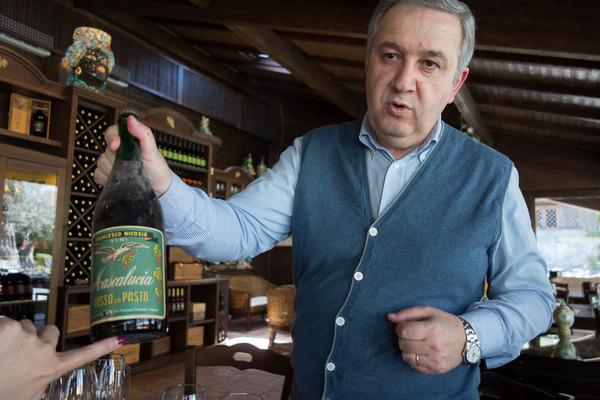 Unfortunately, the middle of the 20th century wasn’t a good time to be in the wine grape business, so Francesco diversified into growing fruit, as well as into what today we would certainly call wine bars. Back then, Nicosia’s 19 Vinazzerias in Sicily were places where men could hang out, play cards, eat eggs, and drink wine straight from the cask.

Francesco’s son Carmelo helped the family begin to sell wine into supermarkets, but he also saw the beginnings of what would become the Sicilian wine renaissance. The previously ignored grape Nero d’Avola was suddenly getting international attention, and winemakers all over Sicily realized that their future did not lie in making Cabernet Sauvignon and Merlot.

Under Carmelo’s leadership, Nicosia reduced its production by almost 30% and began to focus on making high quality wines, rebuilding the family wine cellar, and purchasing additional acreage of old-vine plantings nearby. 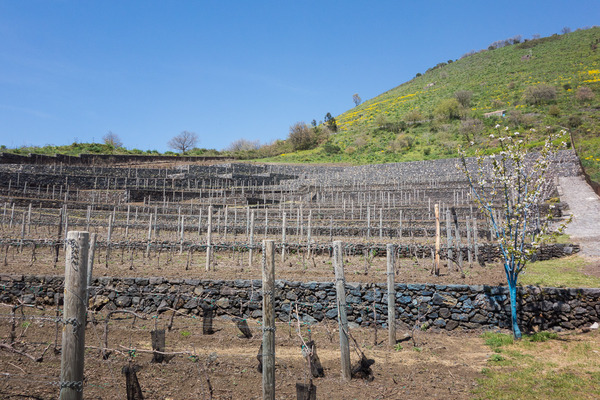 Today Nicosia farms a hair less than 50 acres on Mount Etna, mostly on the slopes of an old cinder cone that sits at about 2100 feet of elevation in the contrada of Monte Gorna. Contradas are the traditional delimiters of Etna’s terroir — old boundaries between large land holdings that traditionally followed the boundaries of ancient lava flows.

Much of Nicosia’s vineyard acreage lies within the zones of the Parco dell’Etna — essentially the Etna National Park, which places some restrictions on how Nicosia can farm, from what material can be used for any trellis posts (wood only) and how they can control the pesky rabbits that root among the vines (they can’t).

Carmelo Nicosia and his staff have spent thousands of hours and tens of thousands of dollars rehabilitating the old stone terraces of their Monte Gorna vineyards. 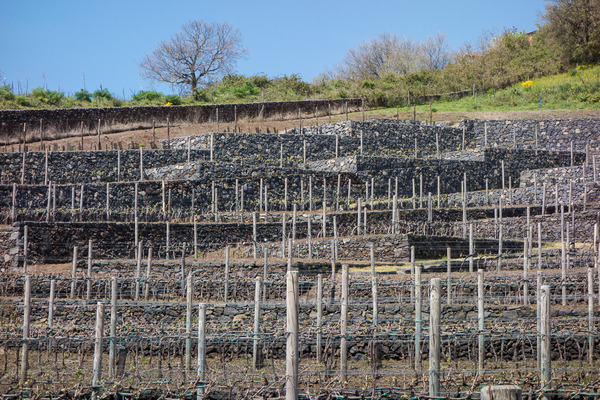 The vineyards are dry farmed by hand according to the Etna DOC restrictions with a density of around 2025 vines per acre, and minuscule yields of around 1.5 kilos of fruit per vine. In a nod to tradition, the family still farms some Pinot Noir in the area, but the majority of the plantings consist of the two primary indigenous red grapes of Etna, Nerello Mascalese and Nerello Cappuccio, and their two white counterparts, Catarratto and Carricante. 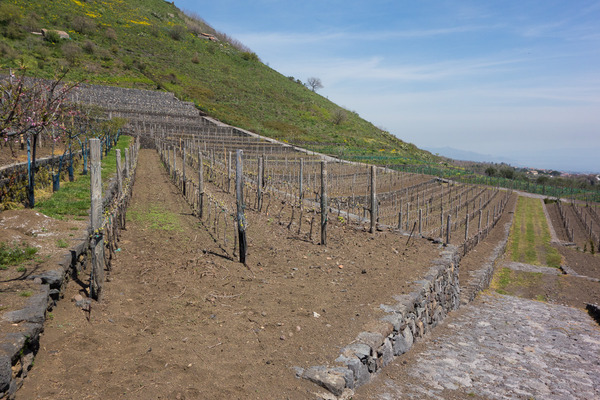 I got the impression that Nicosia operates somewhat like a co-op, though with more control over the farming than traditional cooperatives, and all the grapes end up in bottles bearing the Nicosia name. Total production is somewhere around 170,000 cases of wine, spread across several tiers of production, from inexpensive supermarket wine to the winery’s estate vineyards on Etna which makes up about 15% of the total.

In addition to their own wines, Nicosia also serves as home base for more than 14 small producers, much like more established wineries in California offer “custom crush” facilities for a fee. 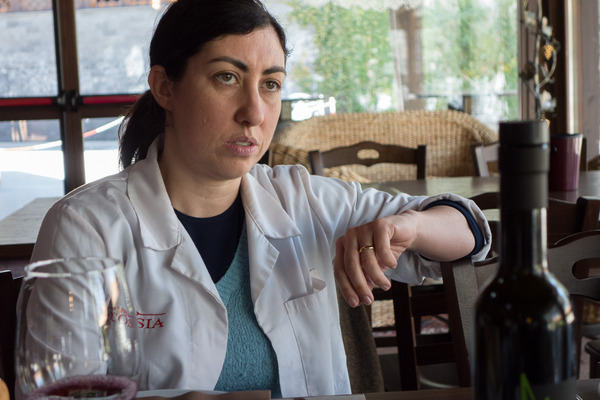 The job of making all the wines, not just Nicosia’s but also some of the smaller producers who use their facility, falls to the young and quite thoughtful enologist Maria Carella, who has held that position for the last five years. Her winemaking regimen is fairly conventional, using commercial yeasts and the standard processes for modern commercial winemaking, albeit with a bias towards older oak and steel tanks in the aging process.

As one of the bigger producers on Etna, Nicosia makes dependable, high quality wines that showcase the beauty of what the mountain can deliver. Unfortunately for the rest of the world, not many of their wines make their way outside of Italy. Their Nero d’Avola appears to be the most common import into the U.S. but I have been unable to locate any of their Etna wines yet. Their Fondo Filaria Etna Rosso makes it to the U.K. where it is a positive steal at around $16 (9 GBP). 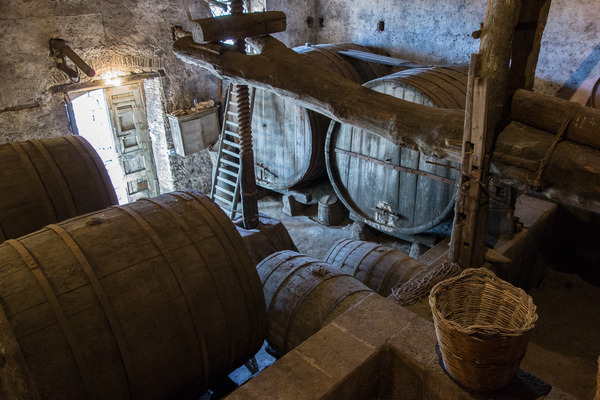 The old palmento winery at Nicosia

2011 Nicosia “Sosta Tre Santi” Sparkling Carricante, Etna, Sicily
Light gold in the glass with medium bubbles, this wine smells of crisp ripe apples and wet stones. In the mouth the wine has a nice linearity, with crisp apple and lemon flavors and pleasant mineral undertones. Not particularly complex, but quite pleasant. Good acidity and a coarse mousse. Made with 100% Carricante using the traditional methode champenoise. 12% alcohol. Score: around 8.5.

2012 Nicosia “Fondo Filara” Etna Bianco, Etna, Sicily
Pale gold in the glass, this wine smells of bright apple and wet stone aromas. In the mouth, green apple, wet stones, and white flowers all have a wet chalkboard minerality. Juicy and fresh, thanks to excellent acidity, with hints of lime in the finish. Tasty. A blend of 60% 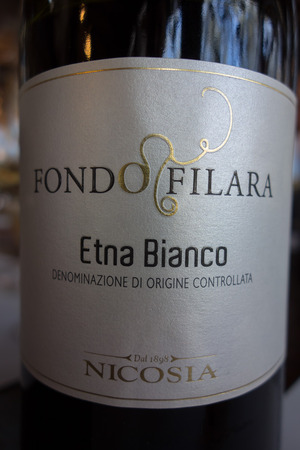 2011 Nicosia “Fondo Filara” Etna Bianco, Etna, Sicily
Light yellow-gold in the glass, this wine smells of honey spread on sourdough toast, white flowers, and wet stones. In the mouth floral flavors mix with deep stony wet chalkboard flavors that are tinged with lemon zest and a hint of green apple skin. The acidity and minerality leave a lightly chalky feeling in the mouth, as the lemon zest and crushed rocks finish soars on. A blend of 60% Carricante, 40% Catarratto. Excellent. 13% alcohol. Score: around 9.

2010 Nicosia “Fondo Filara” Etna Rosso, Etna, Sicily
Light garnet in the glass, this wine has a wonderfully perfumed nose of crushed forest berries and forest floor. In the mouth forest berries and forest floor mix with deep stony earthy notes that are quite compelling. Quite pretty, supple tannins have a suede-like character as they linger through the finish with a plum skin tanginess. A blend of 80% Nerello Mascalese, 20% Nerello Capuccio. 13% alcohol. Score: between 9 and 9.5.

2009 Nicosia “Fondo Filara” Etna Rosso, Etna, Sicily
Light garnet in color, this wine smells of red apple skin and a hint of black olive over deep earthy aromas. In the mouth, wet dirt and crushed rocks are brushed with bright plum and raspberry flavors as well as wet sawdust.. A blend of 80% Nerello Mascalese, 20% Nerello Capuccio. 13% alcohol. Score: around 9.

2009 Nicosia “Fondo Filara” Nerello Mascalese, Etna, Sicily
Light garnet in the glass, this wine smells of briary raspberry and wet wood. In the mouth, extremely high acidity makes flavors of raspberry and huckleberry burst on the palate while deeply stony wet chalkboard flavors attach themselves to the palate along with chalky 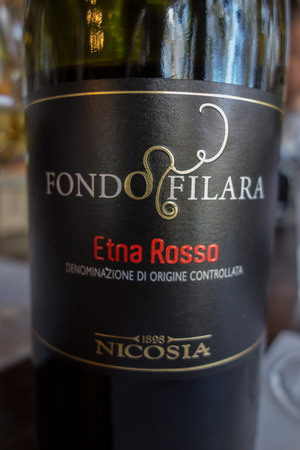 2009 Nicosia “Sosta Tre Santi” Nerello Mascalese, Etna, Sicily
Dark garnet in the glass, this wine smells of forest berries and forest floor aromas. In the mouth, somewhat caramelized flavors of raspberry and mulberry are wrapped in a suede blanket of tannins. The stony, earthy quality of the wine counterpoints with the somewhat polished perfume that hovers in the top notes of the wine. Made from 100% Nerello Mascalese that spent 12 months aging in used French oak barrels. Will be released in September. Score: between 8.5 and 9.

2012 Nicosia “Fondo Filara” Frappatto, Sicily
Brilliant light ruby in the glass, this wine smells of sweet mulberry fruit. In the mouth, bright mulberry and grapey flavors have a bright juiciness to them thanks to excellent acidity. Light tannins add some complexity, but this is a pretty ,lighthearted wine that shouldn’t be taken too seriously. 12.5% alcohol. Score: between 8.5 and 9.

2009 Nicosia Cerasuolo di Vittoria Classico, Vittoria, Sicily
Light to medium garnet in color, this wine smells of cedar, camphor and mulberry fruit, mixed with a deeper forest floor earthiness. In the mouth Juicy cherry and mulberry flavors mix with a deeper loamy quality, and leave a tart, sour cherry flavor lingering pleasantly in the finish. A blend of 60% Nero d’Avola, and 40% Frappatto, aged for 18 months in mostly neutral oak before bottling. 13.5% alcohol. Score: between 8.5 and 9.