At What Price, To Kalon? 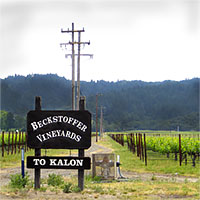 In the annals of California viticulture, few named vineyards can approach To Kalon in either historical significance or popular acclaim. To Kalon has long been known for producing phenomenal wines, but increasingly it has also become famous for something else entirely: the price of its grapes.

A quote by grower Andy Beckstoffer graces the inside cover of a coffee-table book of photographs entitled Cabernet: A Photographic Journey from Vine to Wine by photographer Charles O’Rear. ‘Cabernet is royalty!’ it reads. ‘She is noble, she is powerful, voluptuous, and a profit to all the senses.’

Beckstoffer owns 89 acres (36 ha) of the historical To Kalon vineyard and, since he raised his grape prices again last year, some people have started to grumble about just how much profit might actually be involved.