Do You Need to Worry About Arsenic in Your Wine? 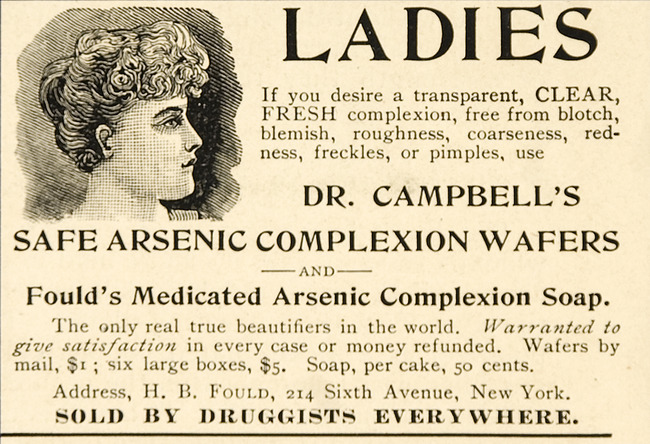 It’s all over the wine news channels, and will soon be in much wider distribution, as these stories spread like wildfire thanks to sensational headlines. CBS News reported today that an organization called BeverageGrades tested thousands of wines and found that more than 20% of the wines contained arsenic levels above the EPA recommended thresholds for drinking water. Arsenic is a naturally occurring metal that is toxic to humans in high doses. Once upon a time it was so common as a poisoning agent that it was known as “the king of poisons and the poison of kings.”

The tests done by BeverageGrades found some wines contained up to four or five times more arsenic than the EPA recommended threshold for safety in drinking water.

This sounds pretty scary. But it is meant to. Especially by the company BeverageGrades, who in addition to being the folks that brought this story to light, also happen to want to sell their testing services to the wine industry, who are probably now concerned about whether their products have elevated levels of arsenic. But that would just be sheer coincidence, right? (see the press release unearthed by Wine Industry Advisor).

Let’s start with the facts.

Arsenic is a naturally occurring compound that is found in the cellular structures of many foods we eat (fruits, vegetables, shellfish and meats) and in all the water we consume in trace amounts. Newsflash: most wines will ALL likely have very small traces of arsenic in them.

Arsenic also happens to be one of the essential minerals our bodies require for health, not unlike selenium, which is another metal that is quite toxic in high doses, but which is found in most multi-vitamins.

Arsenic can also make its way into our food through the water used to grow that food, which is the most likely scenario for its presence in higher than normal levels in the wines described in these news stories. The other likely culprit is bentonite clay, which is commonly used as a fining agent to clarify many wines. Bentonite contains many trace minerals including arsenic and lead.

The EPA threshold for acceptable amounts of arsenic in drinking water is 10 parts per billion. Which, as you probably can figure out, is not very much at all. Now it’s quite logical on one level to be worried about a wine that exceeds that level. But on the other hand think about how much water you drink relative to how much wine you drink.

The average adult generally consumes somewhere around two liters of water per day. If they’re seriously lucky, or seriously happy, an adult might consume a full liter (almost 1.5 bottles) of wine on one particular day. But seven days per week? Then we’re into serious alcoholism territory. And that’s what you’d have to do in order to get yourself a dose of arsenic that approached the amount that the EPA says you should be able to consume safely in your drinking water.

Here’s another data point for you. Apple juice and pear juice contain up to two or three times as much arsenic as drinking water as a matter of course. The Food and Drug Administration has known this for years. In fact the acceptable threshold for traces of arsenic in juice is much higher than it is for water, a fact that the FDA explains by simply saying that people don’t drink as much juice as they do water.

Here’s the relevant quote from their policy (my emphasis below):

“For chronic exposure, using the consumption surrogate for MF 2 years of age and older, inorganic arsenic levels below 50 and 23 µg/kg in fruit juices would not pose a health concern for the mean and the 90th percentile juice consumers, respectively. These levels are in good agreement with the EPA drinking water and FDA bottled water standards of inorganic arsenic of 10 µg/L. Even though arsenic concentrations are 5 and 2.3 times higher, respectively, for average and 90th percentile consumers, juice consumption levels (221 and 449 ml/day, respectively) are correspondingly lower than drinking water intake (1-2L/day). ”

In short, the FDA is not worried about arsenic levels in juice that are up to five times higher in juice than in water.

And what were the most egregious results that BeverageGrades found in their testing of these mass-market wines? Their worst offender was a bottle of Franzia’s White Grenache which had….. wait for it…. five times the amount allowed in drinking water.

This is basically a bullshit, scaremongering story that BeverageGrades is very cunningly using to drum up business.

Now, having said that, would we all like less arsenic in our wines? That seems like a good idea. The FDA, in their testing of pear juice over the years, was regularly in the habit of sending warnings to companies whose juices clocked in at 40 or 50 parts per billion to take a look and see if they could reduce them, but it only forced product recalls when arsenic levels reached 60 parts per billion or more.

Its worth noting, too, that arsenic is more toxic to children than it is to adults, and therefore the FDA has much greater concerns about arsenic levels in products that might be consumed by children, i.e. juice products.

Let’s continue to put all of this in perspective. The FDA limit for daily inorganic arsenic intake from shellfish like mussels, clams, and oysters is 1,000 times higher than it is for juice. Specifically, the FDA says it’s perfectly safe for you to consume arsenic concentrations of 30ppm (parts per million) in a bowl of mussels, versus 30ppb (parts per billion) in juice.

Nonetheless, the FDA is not known for their infallibility, nor for having especially strict standards (compared to, say, their European Union counterparts) for food safety. I think we’d all like less arsenic in our wine, and in our juice, and in our oysters for that matter.

Should some of these wine companies take a look at what they can do to lower these arsenic levels? Absolutely. Are they breaking the law and/or providing consumers with a toxic product? Absolutely not. And they certainly don’t deserve the class action lawsuit that has been filed in the wake of this news.

Do you need to worry about arsenic in your wine? Only as much as you currently worry about it in your apple juice or shellfish.