Warm Up: The 1855 Classification of Bordeaux

The Palais de l’Industrie at the 1855 World’s Fair in Paris.

The Bordeaux Classification of 1855 has had a lasting effect on the wine industry, and has maintained a powerful presence in the marketing of Bordeaux wine.

Things began when Napoleon III requested a classification for the wines on display at the Exposition Universelle in Paris. These grand world fairs were important cultural statements for emerging nations. The fairs were opportunities to show off new technologies and to celebrate various aspects of regional culture from the arts to cuisine. They also served as information hubs where interdisciplinary ideas were exchanged. Advances on display in one industry sector might spark a revolutionary advancement in a different sector.

When 1855 rolled around, Paris was set to host a major world fair, and Emperor Napoleon III had just begun his reign. The Exposition’s success was of importance to him, and there was also an intense desire to out-do the London Exposition that had just dazzled the world in 1851. Emperor Napoleon III put his cousin, Prince Napoleon, in charge of the Exposition, and they had a Palais de l’Industrie built to rival London’s Crystal Palace. The Parisian structure was extremely large, approximately three football fields long and one football field wide. Still, a few satellite buildings had to be built to accommodate the large number of exhibitors.

In addition to celebrating culture, Napoleon made this Exposition different from others by giving it a marketplace air. Just about everything inside the Palais was for sale, with price tags. This market-like exposition gave the event a different feel than previous expositions, and this aim at the Exposition also influenced the Classification of 1855.

Because everything was to have a price tag, it seemed to make sense that the best wines would be the most expensive, and so on, down through tier pricing. For the wine portion of the exhibition, this translated into categorizing the wines into price tiers that, in the minds of the brokers who create the tiers, corresponded with quality tiers.

Making wine a part of the Exposition was another way to ensure that this Exposition would have a leg up on London’s recent Exposition. Wine was important to France, and it would be a major display of talent to give French wine some serious recognition. To give you an idea of how important wine was to France compared to England at that time, consider that in a contemporary report, statistics shows that the city of Paris alone drank 5 times as much wine per person each year than the entire landmass of Great Britain and Ireland combined.

How successful was the Exposition itself for wine sales? Considering that the Palais de l’Industrie had terrible ventilation and the space became incredibly hot during the day, it’s difficult to tell exactly how the wines were showing, but the lasting effects of the classification system still bear great weight today. 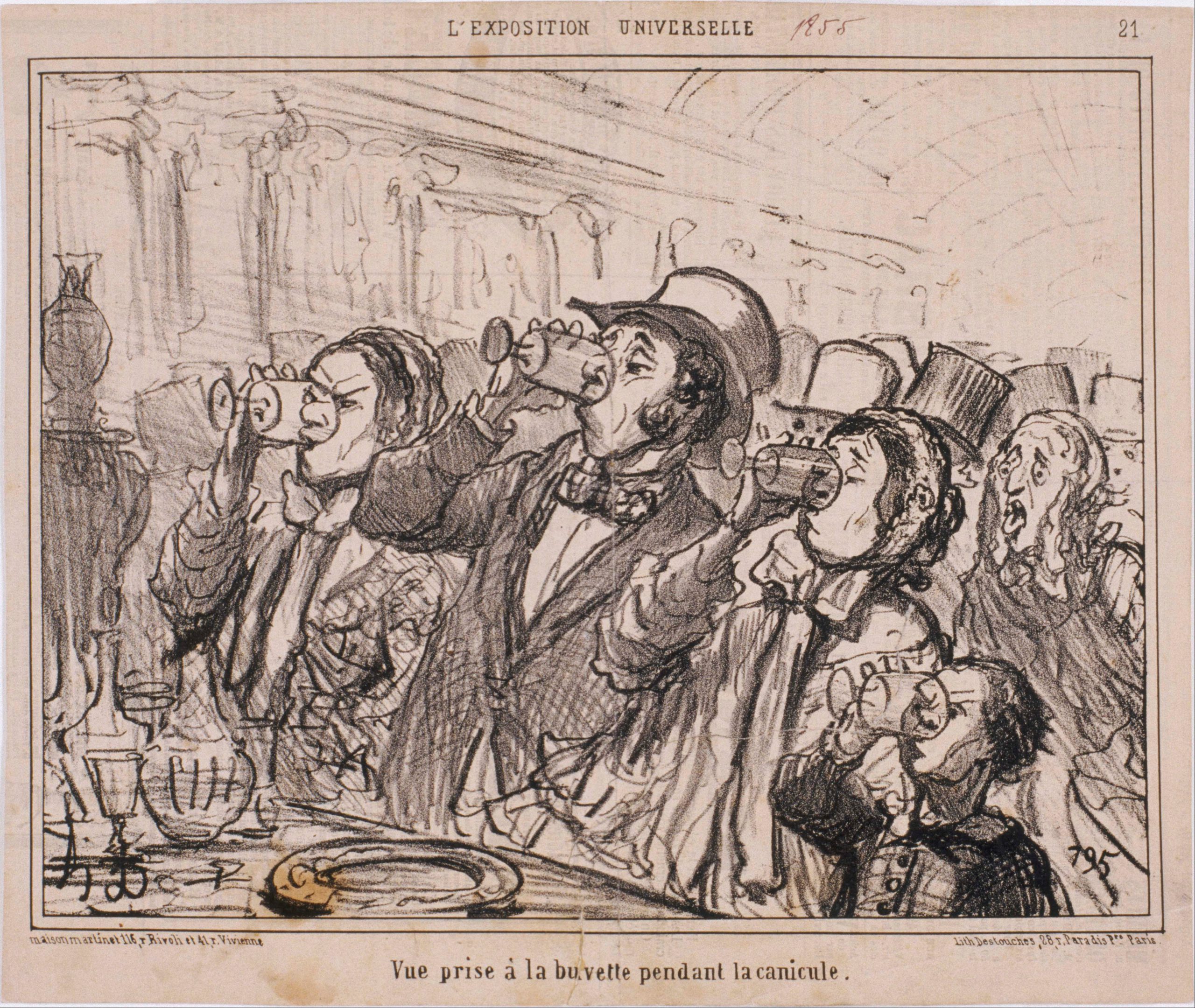 “Chugging at the bar in the midst of the heatwave” by cartoonist H. Daumier, 1855.

The 1855 Classification is not without its faults. Many critics and wine experts create their own lists of best Bordeaux wines to combat the inherent flaws in the classification. First and foremost, the 1855 Classification is based solely on Châteaux, and is not tied to geography. Many of the Châteaux have bought and sold land since 1855, making several of the current Châteaux land holdings much different today than they were in 1855. Divorcing a wine quality classification of land implies that the producer is the most important factor in a wine’s quality, instead of terroir, and this is a contradiction to most other wine classification systems elsewhere in France and in the world. Vineyard material today is much different also, especially after the re-plantings made necessary by phylloxera. And the 2nd label phenomenon has bifurcated production at many of the Châteaux, changing the composition and base-line quality of their product.

Also, the 1855 Classification is not easily amended, which means that producers could theoretically slack off for a long period of time and ride on the coattails of their classification status to carry them through periods of lower-quality output. Likewise, producers could increase the quality of their landholdings and production, but have little to no chance of upward mobility in the classification.

Despite the flaws in the system, the 1855 Classification has surely been a factor in the continued success of the Châteaux at the top of the classification — namely the first and second growth Châteaux. Over time, the persistent resilience of the 1855 Classification has created an almost untouchable air around First and Second Growth producers, who, for the most part, do not seem to experience the same fluctuation in market popularity as other Bordeaux producers.

Who would have thought that a few brokers putting together a priced quality list of Bordeaux producers for the 1855 Paris Exposition could have such lasting effects on a wine region?