Book Review: Shadows in the Vineyard by Maximillian Potter 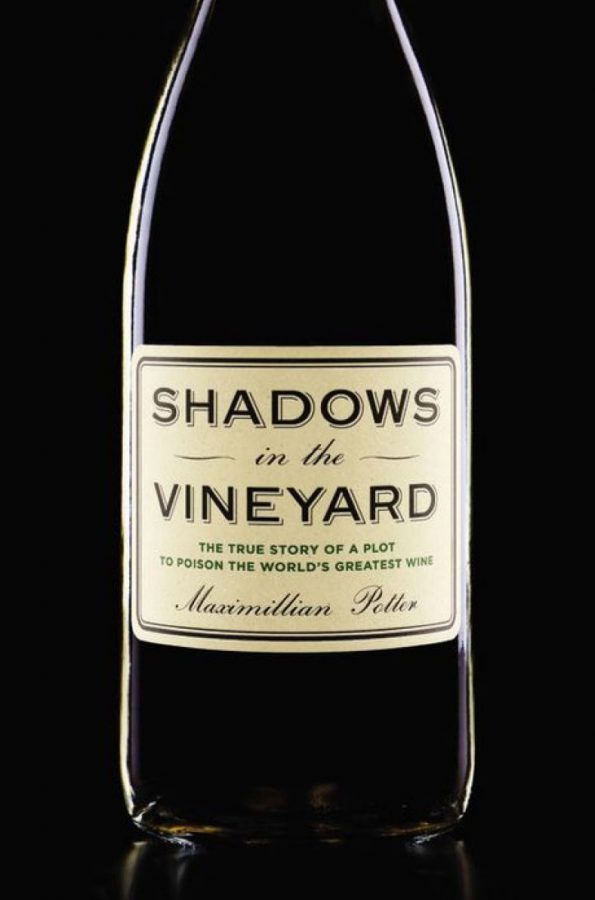 Domaine Romanée-Conti’s wines are perhaps the most famous in the world, and amongst the most expensive. The highly allocated bottles are reasonably scarce and cause a craze among collectors, particularly when it comes to bottles of the wine made from the Romanée-Conti vineyard itself. It is hallowed ground for Burgundy lovers and oenophiles the world over. A stone cross – a relic from the vineyard’s days in the hands of monks, marks the site – seems to watch over Romanée-Conti like a silent sentinel. Perhaps due to the vineyard’s renown, it became the target of a sinister extortion plot.

Shadows in the Vineyard: The Plot to Poison the World’s Greatest Vineyard grew out of a story Maximillian Potter wrote for Vanity Fair and tells how, in 2010, DRC winemaker Aubert de Villaine received a series of ransom letters demanding 1 million euros in order to prevent the poisoning of the domaine’s eponymous vineyard. Although initially no one on the management team at DRC believed that anyone could have the audacity to carry out such a threat, they quickly realized the repercussions to ignoring the letters when two vines turned up dead. Immediately the police became involved, but great strides were taken to keep the affair quiet.

The book presents an insightful look at the history of the legendary grand cru and the people most closely associated with it, interwoven with the circumstances of a rather curious crime. Potter delves into the history of the Romanée-Conti cru, covering its planting by Cicstercian monks in the Middle Ages; through the battle between Louis-Francois (the Bourbon royal and Prince of Conti who would lend his name to the vineyard), and the larger-than-life figure Madame Pompadour for ownership of the site. He goes on to describe its post-French Revolution fate, and how this idyllic piece of land ended up in the de Villaine family. Potter takes great pains to highlight the fact that Romanée-Conti is more than just a vineyard: it is, like the rest of Burgundy and the wine it produces, an integral part of France’s cultural fabric.

The development of the crime story itself – “1 million euros or the vineyard gets it” – executed by a small time crook Jacques Soltys, left a bit to be desired. With so much focus on the anguish it caused de Villaine and his colleagues, you would expect more chapters to be dedicated to Soltys and his plot. Extorting money by threatening to poison vineyards is an uncommon crime, and certainly no one had ever targeted such a high profile estate before. This is the one major drawback in this book – it falls short of being a truly engaging as a true crime story – which is a bit surprising given Potter’s experience as a crime reporter.

That said, in spite of not feeling exactly like a true crime novel, Potter uses highly descriptive, evocative prose that allows the reader to slip into the story with ease. You forget that only a few years ago someone actually planned to destroy Romanée-Conti, and that Potter’s characters are or were real people. His admiration for de Villaine and his property are apparent in his effusive praise, which at times flirts with being excessive. More than anything, the book is a lovely ode to Burgundy as a whole and to DRC specifically, composed by a man who utterly fell in love with the region. Potter tells the history of the vineyard up to the present through its people and that in of itself, makes for excellent reading.

Shadows makes for a quick, enjoyable and interesting read, with overall solid storytelling. Burgundy lovers will particularly enjoy it, as will anyone with an interest in French history. Although he could have spent more time covering Soltys, Potter uses his wonderful narrative skills to paint a vivid picture of life around the Romanée-Conti vineyard, its origins, the love and awe it inspires, and its importance as a cultural emblem of France. Rather than being just another wine book, Shadows marries together various aspects that make wine such a fascinating subject – history, science, people and a spark of the divine, in a way that is accessible to anyone and everyone who likes a great story.

Maximillian Potter Shadows in the Vineyard: The True Story of the Plot to Poison the World’s Greatest Wine, Twelve 2015, $13.00 (Paperback).

Camille Berry is a sommelier, writer and editor based in San Francisco. A Certified Sommelier and Certified Specialist of Wine, Camille’s writing has been featured in publications both locally and abroad. She has participated in TopNewSomm two years in a row, spoken on discussion panels, and helped create dynamic beverage programs on both coasts. Her website may be found at www.camillefberry.com.