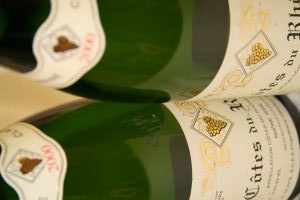 Some wines just ruin you. One sip and you realize the folly of your ways and can never go back to thinking or drinking wine quite the same way again. Really, when I think about it, this happens to me all the time. Not with every wine, mind you, but with many good ones, there’s something in the glass that lifts you to a place that you can’t come back from. Of course, you do go back and have a California Sauvignon Blanc every once in a while after tasting a great Sancerre, but you’ll always remember that there’s something else out there.

Of course, I will continue to try the Marsanne and Rousanne wines that the California Rhone Rangers produce, but all it takes is a wine like this one for me to realize just how far they have to go in order to hold a candle to the stuff from the old country. Don’t get me wrong. There several producers who are making decent white Rhone wines in California, but on the whole, most of them are pretty lackluster compared to even some of the most ordinary village whites of the northern and southern Rhone valley.

This wine, though, no matter where it might humbly hail from, could never be considered ordinary as long as it was made by Auguste Clape. Clape, at 80 years old, is one of the few remaining old heroes of French winemaking, an icon whose name is synonymous with some of the best wines in the Rhone, and some say the world. Certainly anyone who has decided to seriously explore Syrah cannot consider themselves educated until they have had a Clape Cornas, a deeply inky, mineral-rich wine that is unique in its power, depth, and complexity.

The tiny village of Cornas is home to only a couple of thousand residents and perches on the shoulder of large granite outcroppings in the northern part of the Rhone Valley. These large hills protect the steeply sloped vineyards, famous since the time of Charlemagne, from the cold north Mistral winds, and their crushed talus provide rocky footing for terraced rows of vines.

The son of a chartered accountant, Auguste Clape first came to Cornas in 1949 to marry his wife, the daughter of a local winegrower. There, the two are still happily married and continue to live in the same family house, and farm the family vines (many of which are now approaching 100 years in age). On his arrival, Clape went to work in the vineyards, and that is where you will still find him, along with his son Pierre-Marie, making wines in the same way he has for decades. Clape is affectionately called the King of Cornas, both because his wines are widely considered to be the best from this tiny appellation (and when I say tiny, I mean it — about 250 acres total), and because he has sometimes single-handedly fought to maintain its integrity and recognition over the years.

While he might be a traditionalist, that didn’t stop Clape from going back to school at the age of 50 to study viticulture and oenology. Clape applies and mixes new theories with old traditions in his winemaking, and has reached the point where he can make a good wine no matter what the weather throws at him, a skill that is both rare and enviable in the Rhone valley.

No amount of education in modern winemaking and winegrowing practices were enough to convince Clape of the virtues of new oak for winemaking, however. Clape continues to use neutral oak barrels or steel for all his winemaking, and he has no problem waiting months and months for the fermentations to finish on his wines. Likewise most of his wines are still made by hand in meticulously picked, sorted, crushed and fermented single lots. These lots, after they have taken their good sweet time to ferment and age for a while are blended to make the final wine.

Clape produces only a few wines: his famous Clape Cornas (Syrah); a white wine from St-Péray, which is a neighboring appellation that starts literally down the road from Clape’s house; a simple red blend called Le Vin des Amis; a red Côtes-du-Rhône; and this white Côtes-du-Rhône. On occasion, he will also take some wine that ordinarily would go into the Cornas and bottle it as a special Côtes-du-Rhône.

This white Côtes-du-Rhône is most likely a blend of several white grapes, which might include Grenache Blanc, Bourboulenc, Marsanne, Rousanne and Viognier, with the majority of the blend probably being Marsanne and Rousanne.

Tasting Notes:
Light gold in color, this wine has a refreshing nose of pears, lemongrass, and wet felt aromas with a clean steely minerality to them. In the mouth it is lovely in texture with excellent acidity and primary flavors of cold cream, honey, pears, wet slate, and just a hint of rosewater in the relatively long finish. A classic white Rhone and a delight to drink.

Food Pairing:
This wine will go with any food that deserves a nice dry white wine, from fish, to creamy sauces, to vegetables. If I had a choice, I might drink it with some tasty little stuffed squid.

This wine is unfortunately tough to find on the Internet, especially in recent vintages. It is imported by Kermit Lynch, and presumably available in his retail store.