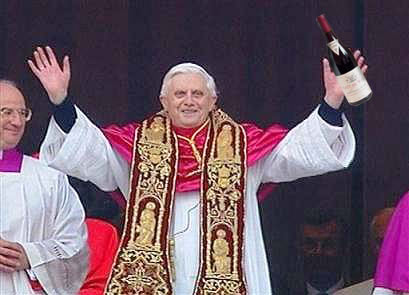 I don’t know about you, but I get spam all the time telling me that my MBA, PHD, or other advanced degree is just a click of the mouse (and $99.95) away. I’ve never understood the idea of an honorary degree either, except for those folks like Einstein who are clearly such geniuses that they’d never get anything out of a university where they’re smarter than all the professors. Sure, you might as well give them a PhD. But for the normal world, the conferring of honorary degrees has always seemed a bit like institutional ass-kissing to me. Or should that be ring-kissing?

Which brings me to the Pope, who, in addition to being Benedict the Sixteenth is apparently now a Sommelier in the Italian Sommelier Association. Yes, that’s right, in addition to kissing his ring, you now also have the option of kissing his corkscrew. Which sounds naughty even just writing about it.

Apparently this honor was conferred on the spiritual leader of the Catholic world after he described himself as the “humble servant in the vineyard of the Lord” and attended a ceremony for the aforementioned society of sommeliers.

So now that he’s a sommelier, does that mean the communion wine is going to get better? And I wonder how long the wait list is at the Vatican restaurant now that there’s the opportunity to have the man himself bring up some goodies from the cellar, which I’m sure has been well stocked for centuries.

Regardless, I’m sure there are wine professionals all over the world sighing in relief. There might actually be a chance for redemption after all that wine drinking after all.

That’s what I’m praying for, anyway.

What’s that he’s holding? A Chateauneuf-du-Pape of course!