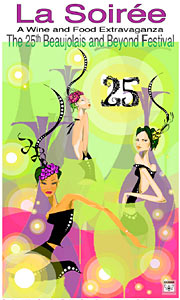 I go to a lot of wine tasting events in San Francisco. Certainly almost all the major public events of one sort or another. So it always surprises me when one pops up that I’ve never heard of, but seems to have been going on for years right underneath my nose, so to speak. Such is the case with this, the 25th Annual Beaujolais and Beyond festival, put on by the French Chamber of Commerce in San Francisco.

Timed for the first Saturday after the release of Beaujolais Noveau, this is apparently an extravaganza of food, fashion shows, and wine in the ballrooms of the Hyatt Regency San Francisco. Oh, and there’s music and dancing and a silent auction, and a raffle too. I’m exhausted just thinking about trying to do all those things in one evening. But I suppose just like a carnival, you pick and choose which rides to go on.

The wines that will be poured will include a lot of the purple, fruity, just-barely-wine stuff that is Beaujolais Nouveau (from producers like Deboeuf, Mommessin & Bonchard, and Louis Latour) along with other still and sparking wines from several different producers (Domaine des Coccinelles, Cave des Papes, Deutz) and import companies (Chrissa Imports, The Organic Wine Company, Wine Warehouse). Gallo will be there pouring its Red Bicyclette line of French wines as well.

I have no idea whether this is an event worth going to or not, but apparently over 1000 people every year think it is. Any feedback from readers who have attended is appreciated.

Tickets are $55 with a small discount for members of the French American Chamber of Commerce. They can be purchased from the event web site. They will also be available for $60 at the door on the night of the event.