Blogging From Paradise: Day 2 at the Aspen Food and Wine Classic 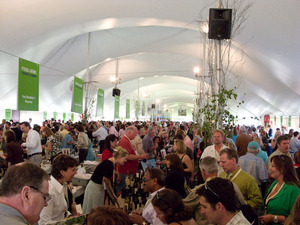 Day two of Aspen’s Food and Wine Classic was blessed with the same weather as the first. Crystalline blue skies, 75 degrees and sunny. I gave my second Napa’s Next Superstars seminar to a nearly full auditorium at the Given Institute, and after hanging around to chat with some of the attendees about the wines, I was free.

With all my seminars behind me I had the opportunity to finally explore the Classic as a spectator instead of a speaker. The first thing I did was head down to the Grand Tasting tent to get a few bites of food — a lunch constructed out of small samples of grilled rib eye; rum cakes; brownies; grilled lamb and salad; crab cakes; roasted fingerling potatoes; fresh gazpacho; and bits of Spanish cheese. Plenty of other people had the same idea:

It’s a pretty astonishing sight this gathering of thousands of food and wine lovers under one huge canvas awning.

After this pastiche of a light lunch I headed over to one of the event venues to watch the third annual Sommelier Challenge — a panel session hosted by Lettie Teague, the Executive Wine Editor of Food & Wine magazine. 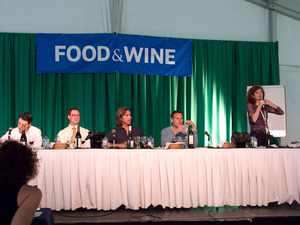 Not your usual panel session, this event pitted four of the country’s top sommeliers against each other in a sort of “sell-a-thon” where they are asked to speak to the audience about different wines, after which the audience votes on who they think did the best job.

This year’s lineup of sommeliers was a formidable cast of characters:

Each of the sommeliers, including the audience, had five glasses of wine in front of them:

When I saw this session’s listing in the program, I assumed this would be a blind tasting, but instead of putting each of these guys palate’s to the test, they were instead being evaluated on their schpiels. Each would be required to speak about one of the first four wines as if they were providing a recommendation of the wine to a restaurant patron. Then each would get a shot at performing the same task for the fifth and final wine.

After Teague’s introductory remarks, the serious looking Bobby Stuckey (last year’s champion) introduced the audience to the Chilean Sauvignon Blanc. Stuckey took an enthusiastic, if traditional, approach to the task, pleased that he had been assigned the wine that, in his view was a perfect match to the Summer day we all walked out of into this session. He praised Sauvignon Blanc’s qualities, and offered his tasting note for the wine, noting its low alcohol level and food friendliness.

I thought this was an excellent wine — one of the better Sauvignon Blanc’s I’ve had from Chile. Here are my tasting notes:

2007 Santa Rita Floresta “Leyda” Sauvignon Blanc, Chile
Pale green-gold in the glass, this wine has a vibrant nose of grassy, juicy gooseberry aromas. In the mouth it is crisp, lean, zingy with acidity, and explosive with lovely kiwifruit, lime, and starfruit flavors. Score: around 9. Cost: $23. Where to buy?

Next in line was Richard Betts who spent a few minutes good naturedly suggesting that Sauvignon Blanc was perhaps a bit too pedestrian and simple a wine for a day as lovely as the one we were having (which prompted protests from Teague who admitted that she bought that particular Sav Blanc by the case). Betts suggested that as a sommelier his job was to be “an enabler” — an advocate whose sole goal was to turn you on to something you’d really like. Instead of Sauvignon Blanc, he suggested, the audience might prefer something more truly Summery, like the complex peach and floral qualities of the Tablas Creek white. He spoke about the wine like it was an old friend, referencing the history of the Perrin family behind it, and shared his own rambling tasting note.

I’ve had this wine several times, and always enjoy it, but I have to say, at the time, I preferred the Sav Blanc.

2006 Tablas Creek “Esprit d’Beaucastel” Blanc, Paso Robles, CA
Pale gold in color, this wine truly does smell like a summer’s day — nectarines, white flowers, and other tropical fruits. In the mouth the wine is silky and weighty on the tongue with flavors of elderflowers, peaches, and orange blossoms that linger in a moderate finish. Score: between 8.5 and 9. Cost: $40. Where to buy?

Stuart Roy was up next, and began by suggesting that the lineup was truly unfair, but such was life, as he had clearly been given the best wine of the group. He went on to offer an explanation to the room of where the wine came from in Italy, and professed his love for the few Italian regions whose names included both the name of the grape as well as the place they came from, in this case, Barbera from the town of Alba. He waxed fanatical about the wine, making special note of its acidity and minute long finish, and suggested that it would be one of his favorite wines to recommend to any diner looking for a red wine with their food. Roy was articulate and knowledgeable, but came across as more formal than Stuckey and Betts. I certainly shared his appreciation for the wine however, which was excellent.

2005 Vietti “Tre Vigne” Barbera d’Alba, Piemonte, Italy
Dark ruby in color this wine had a gorgeously floral nose that slipped sideways between violets and lavender with undercurrents of leather and red fruits. In the mouth it was smooth, even polished on the palate, with dusty tannins, beautiful acid balance, and flavors of dried cherries, leather, and sweet flowers that lingered in the truly memorable finish. Score: between 9 and 9.5. Cost: a steal at $24. Where to buy?

Finally, John Ragan got the chance to set the record straight about who really had the best wine on the table. He went on to speak about how Syrah was a trendy grape at the moment, but that its true home was in the Northern Rhone (he actually said that was the birthplace of Syrah, but I believe the Syrah grape’s origins have been traced back to the Middle East). He seemed quite familiar with the producer and this specific wine, describing the single vineyard it came from, and praising the degree to which, in his opinion, the wine personified the true essence of Syrah. Ragan was likeable and knowledgeable, but his pitch seemed to be missing the hook that might have won me over as a diner. The wine was, indeed, classic, however.

2005 M. Chapoutier “Les Granits” Rouge Saint-Joseph, Rhone, France
Dark garnet in the glass, this wine has the classic white pepper, black fruit, and wet earth aroma of Syrah. In the mouth it is frankly beautiful, perfectly balanced with great acidity and subtle dusty tannins. The flavors are deeply mineral in quality, encased in a blanket of dark blackberry and mulberry fruit, and dusted with white pepper. A long finish completes a picture perfect Rhone experience. Yum. Score: between 9 and 9.5. Cost: $60. Where to buy?

The most interesting part of the challenge involved the recommendation of the final wine, a brute of an old-vine Grenache from Spain that was heavily extracted, and heavily oaked. Stuckey and Roy both endorsed it as a big wine from a great region that would make folks looking for a major red very happy. Interestingly, and in my mind to their credit, both Betts and Ragan said that they couldn’t, in good faith, recommend the wine to us.

“What do you smell? OAK!” He went on to suggest that the wine offered no real sense of the place it came from, and was more of a vanity piece than a wine of character.

Ragan agreed, saying “This wine has no fingerprint, no trace of its true identity. Wine has to take you someplace special, and this one doesn’t.”

The Montsant was indeed a heavily oaked concoction.

2005 Celler Can Blau “Mas de Can Blau,” Montsant, Spain
Dark purple in the glass, this wine smells of the sweet vanilla of French Oak wrapped around super-ripe cherries. In the mouth it is tight and angular, with flavors of sawdust, sweet oak, leather, and dried red fruit. The tannins are somewhat abrupt and chewy, and the finish not particularly striking. Score: around 8. Cost: $45. Where to buy? 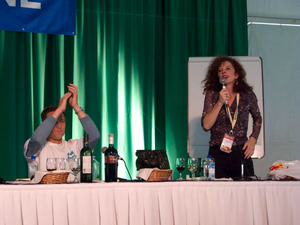 Bobby Stuckey for a second year in a row, by a rather wide margin. Personally, after all was said and done, I was pulling for Betts, but the crowd clearly seemed to favor Stuckey. Stuckey and Betts are best friends, and after receiving his prize of the precious champions airbrushed t-shirt, Stuckey offered to let Betts wear it for the second half of their usual joint morning run tomorrow.

The session was a lot of fun, and a good reminder that some of the country’s best sommeliers are quite young, personable, and incredibly approachable. They inspire confidence and curiosity in wine drinkers, and that is a very good thing.