Wine Blogging From Paradise: Day One of the Aspen Food & Wine Classic 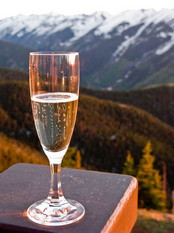 I just finished my first day at the Aspen Food and Wine Classic, and my second day back in my home town for the first time in 14 years. It’s been quite an honor to be asked to speak at this year’s classic, but so far it has been an incredible pleasure and a deeply nostalgic experience.

Returning to the little town where I grew up (most people don’t think of Aspen as so small, but in my day there were about 9,000 permanent residents — my high school class had 72 people in it) is a very surreal experience. The geography of the place is ingrained in me — I know the streets, the buildings, the location of the mountain peaks, but in a purely intuitive way I couldn’t tell you how to get most places, but I could walk there myself. A lot has changed, as Aspen continues to go through a development boom, but so much remains the same. This is still the place I remember and occasionally dream about.

Oddly, however, everything seems….smaller. The buildings are smaller than I remember them, the distance between landmarks much shorter, even the interior spaces of some favorite shops and restaurants have a diminutive quality that even as they provoke pleasures of memory also add a bit of unease. 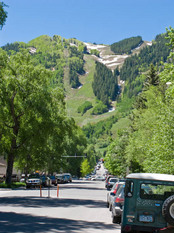 As I walk around the town, I seem to think I recognize so many people. In some of the younger ones, I wonder if I’m seeing the grown-up versions of the elementary school kids I saw on the bus when I was in High School. Others, I’m sure are probably longtime locals that I’ve seen a million times before.

Aspen is in the full bloom of a gorgeously green spring, today there wasn’t a cloud in the sky and the temperature hung around 70 all day long — classic summer weather for Aspen — nothing unusual there. What was unusual, however, was the sight of people carrying their skis and boots towards the Gondola for a day of skiing. Yes, that’s right, skiing on June 13th. Call it lucky Friday the 13th.

Yesterday it snowed briefly in town, but more importantly a look at the socked-in tops of the mountains showed that it was blizzarding up there. And this on top of the still-heavy snowpack that remains at the highest elevations. No one can ever remember skiing this late into the season before.

Of course, most people in Aspen this weekend aren’t thinking about fresh tracks, they’re thinking about fresh chefs, new dishes, and fabulous wines. For those who aren’t familiar with the Food and Wine Classic, it is two and a half days of food and wine seminars, cooking demonstrations, parties, and a “grand tasting” tent where hundreds of wineries, food purveyors and other companies offer samples, tastes, and other informational tidbits to attendees. It is widely regarded as the premier wine and food event in the country.

This morning I gave three seminars, one entitled Napa’s Next Superstars, and one entitled Sake For Wine Lovers (which I gave twice) to festival attendees.

The first seminar, Napa’s Next Superstars was my attempt to introduce people to several wines from Napa that were either brand new to the market and destined to be great or were flying under the radar of most consumers. I distinguished superstars from “cult wines” by virtue of the fact that these were wines that the attendees could actually get a hold of with a little bit of effort on their part (provided their home states didn’t prevent them from doing so). 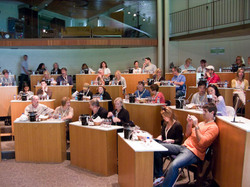 The wines I poured for the attendees were:

and then I threw in a ringer wine, that I thought stylistically fit with the grouping above, but was made far from Napa:

My review of this wine will be forthcoming shortly

I was particularly happy to be able to offer the very first tasting of any kind for members of the public for both the Meteor and the Star Lane, as both are just now being released. The seminar was attended by nearly 90 people and I was very happy with how it went. I’ll be giving the same seminar again tomorrow (Saturday) morning.

My second (and third) seminars of the day were my Sake For Wine Lovers seminars, which were designed to be introductions to sake, as well as an opportunity to taste some of what I (and some others) think are some of the best sakes in the world.

I poured the following sakes as part of the seminar:

Reviews on the Ohyama and the Kamotsuru will be forthcoming shortly.

I also had a chance to wander through the main tent to check out what was on offer, and was surprised that it was heavily dominated by wineries, which the thousands of milling 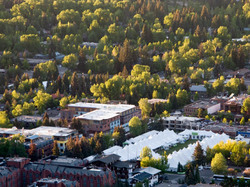 attendees and their glasses seemed thrilled about. I didn’t have much time to stop and taste, but I noted with pleasure the presence of some really top wineries, such as Massolino from Italy’s Piemonte Region, Movia from Slovenia, Hofstatter from Italy’s Alto Adige, and more. The Washington Wine commission also had a table there with some excellent Washington state wines, and the country of Spain had their own little private tent, which I put on my list for tomorrow’s exploration.

This evening American Express Publishing (the parent company of Food & Wine Magazine) threw a spectacular party at the top of Aspen Mountain (yes, the same mountain they were skiing on today). Invited attendees rode to the top of the mountain in the Silver Queen gondola as the sun was setting, and emerged at the top to be greeted by a fire juggler, a belly dancer, and a Moroccan style feast of epic proportions.

All in all, it was quite a day. I spent most of it working to prepare for, and then giving my seminars so I haven’t had much of a chance to taste any wine or really generate anything that you might enjoy reading, other than this recap. The evening before the event however I did have a chance to taste some extraordinary wines out of magnums at the much anticipated Magnum party. I’ll likely review some of those later, but one of the treats I’ll share with you now was an unusual California antiquity: 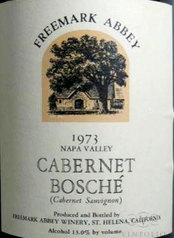 1973 Freemark Abbey “Cabernet Bosché” Cabernet Sauvignon, St. Helena, Napa
Light ruby in the glass and sprinkled with sediment, you’d never know this wine was 35 years old simply by looking at it as the color, while light, was pure and free from the brownish tinges that mark older wines. The nose offered gorgeous aromas of juniper, sawdust, and redcurrant that could only have come from slow, beautiful development over time. In the mouth the wine is delicate and dry on the tongue, with flavors of eucalyptus cedar, leather, and tart cherry fruit that remarkably still has some juice to it. The wines pretty aromas were only outdone by its long, languid finish. This was never, and will never be a world class wine, but I tell yaw, it emphasized my growing belief that some of the best undiscovered values of the wine world are the relatively ordinary Napa Cabernets from the Seventies and Early Eighties. Score: between 9 and 9.5. Cost: about $40 if you can find it.