A Brief Tale of Three Vintages in Napa Valley 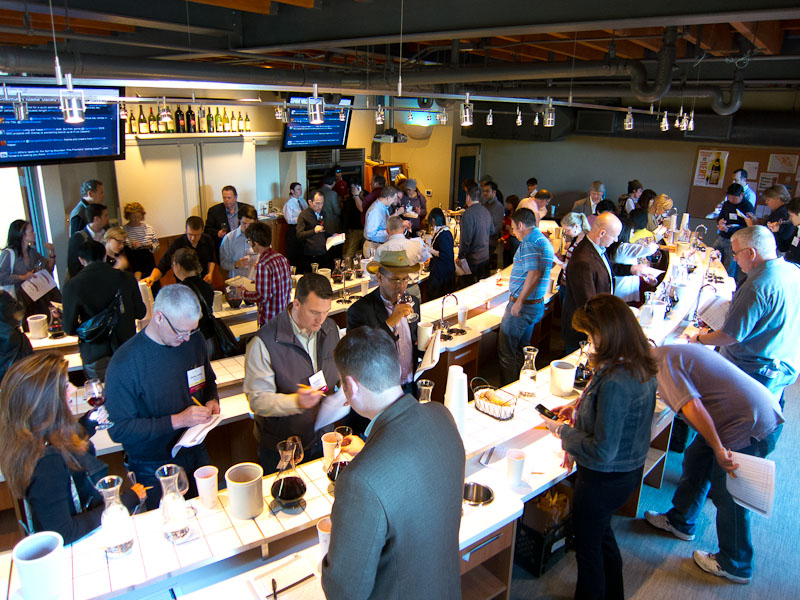 For the past few years, just prior to the big barrel auction that the Napa Valley Vintners uses to fund much of its operations, it puts on a very interesting wine tasting event. Called the Vintage Perspective Tasting, it offers up a number of wines to be tasted blind by the trade and press as an educational exercise.

This year’s tasting offered 14 Cabernets and 9 Merlots from Napa Valley, each across three different vintages: 2007, 2008, and 2009. The idea, of course, is to taste these wines and see what you think about the vintage character.

I often spend time making detailed tasting notes at this tasting, because someone has already done the work of double-blinding the whole group, but this year I decided to try to get as clear a feel as possible for the vintages themselves. I stuck to the Cabernets, and tasted them and jotted notes with the idea of simply trying to capture the dominant character of the wine, with the idea being that comparing these brief notes across different wines, I could get a good read on my reactions to the vintage.

After the tasting, the staff on hand will give you a key, so you can match your notes to the actual wines, and find out what you liked or did not (if you were keeping track).

So here’s the 14 Cabernets I tasted, with my brief notes (completely unedited, including some false guesses about the identity of the wines) about each vintage. I’ll sum up my thoughts after the notes.

Howell at the Moon

It’s obviously ridiculous to pass judgement on an entire vintage in any way, shape, or form. Leaving aside the drastically different outcomes that can be produced by the farmer in the vineyard regardless of the year, so much variation exists in micro-climates and sub-regions even in a smaller appellation like the Napa Valley, that any generalization can be immediately refuted. It’s not that exceptions are the rule, it’s that the differences defy any rule to begin with.

Of course, having said that, I’m about to make some generalizations about the 42 wines I tasted that are characterizations of the vintage character that seemed to be thematic across them.

The 2007 vintage in Napa Valley was generally marked by a very, very cold, and drier than normal winter. Spring warmed up nicely, however, and the key elements of budding and flowering proceeded without much incident. The cooler summer offered a few hotter days around the beginning of September, but it cooled off again quite rapidly, allowing a lot of discretion for when to harvest.

The 2008 vintage also suffered from lower rainfall in the winter. The dominant events of the vintage were a deep, crushing frost in May (the worst in decades, which actually killed some vines), some windy weather during fruit set and blooming which further reduced yields, and a late summer heat spike well above 100 degrees for seven straight days. After the heat spikes, the weather evened out, and those whose fruit wasn’t cooked harvested happy.

The 2009 vintage had the third straight winter with rainfall below 60% of normal. What rain came, however, pushed much later in the Spring, delaying some vine activity, but giving them good moisture for a long, cool summer with only a few days here and there above 100 degrees (far less than normal) and harvest proceeded with only a brief rain scare.

To my taste, the 2007 wines above were generally well balanced when it came to fruit and acidity, but definitely showed some muscular tannin that seemed to be on the aggressive side in many wines. The fruit itself was what I consider fairly typical for Napa, which is to say that it was generally rich and ripe, but not over-ripe.

2008 by contrast seemed to have a much riper to over-ripe character across these wines, with lower acidity. Tannins were thick and sometimes overly heavy which, in combination with the lower acidity levels, made the wines feel a little thicker and a little clumsier, as well as a little dried compared to the 2007s.

2009 by comparison was my favorite of the vintages, with good acidity and what seemed to be a return to cooler, (relatively) leaner fruit profiles. A lot of these wines seemed to have fairly burly tannins, perhaps more than 2007, but not as thick and peanut-butter-textured as 2008 seemed to be.

While there seems to be a lot of good things being championed about the 2008 vintage by many critics, I think 2009 will be even better. Many of those wines, especially from producers that age their wines for some time, started to be released this past fall, and will continue to be released in greater numbers this spring. If you’re a buyer of Napa cabs, I’d keep your eyes out.