On a Balloon and a Prayer: Bordeaux Grapples with Climate Change 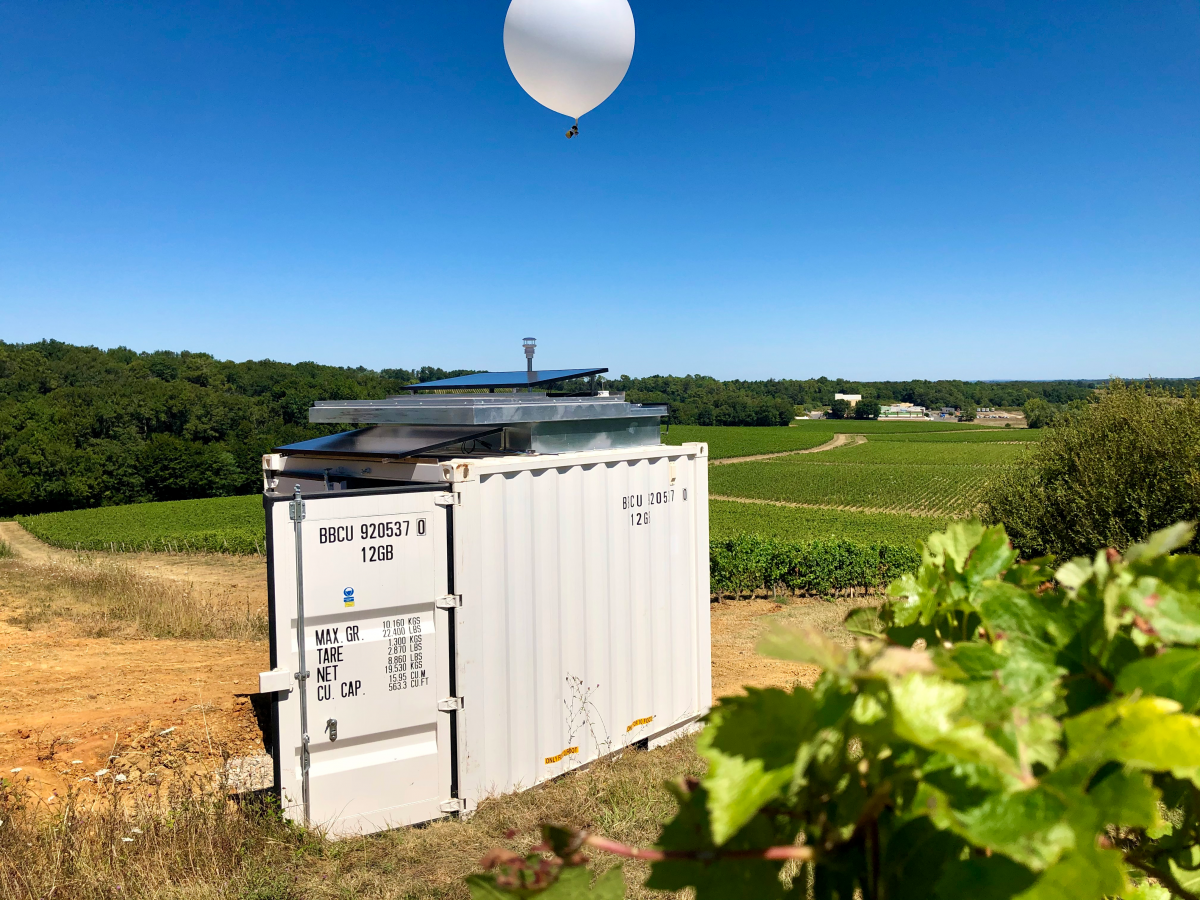 In a press release brimming with enthusiasm and beautifully illustrated diagrams explaining their new project, the winegrowers of Saint-Emilion in Bordeaux announced yesterday their intention to implement a “collective hail control system.”

Hail has become a significant scourge for winemakers throughout Europe in recent years, as weather systems have become more volatile and violent in the age of climate change. The last two years have seen significant hail damage in and around Saint-Emilion as grape-sized hail pummeled vineyards, destroying up to 50% of the crop in some areas.

The announced hail suppression system will consist of a network of “launchers” or “firing posts” (seen above) spread evenly throughout the Saint-Emilion growing region.

Guided by a radar system that will alert winegrowers to approaching thunderstorms, these launchers will release balloons filled with helium and salts that will rise up into the clouds and explode at a pre-determined altitude, each showering the cloud with 200 grams of calcium chloride.

The theory of introducing particulates into clouds to trigger precipitation is known as cloud seeding. Traditionally cloud seeding has been attempted in an effort to produce more rain or snow.

In this case, however, the winegrowers of Saint-Emilion are working on the theory that their salt particles will produce innocuous rain rather than dreaded hail. The idea being that the particulates introduced into the cloud will pre-emptively cause precipitation (every raindrop needs a grain of dust in order to form) and because those particulates are salts, they will lower the freezing point of each water droplet, making it less likely to freeze as it whirls through the updraft of a cumulonimbus cloud.

There’s just one problem. Cloud seeding has long been understood to be minimally effective and almost entirely unreliable when used to produce precipitation. While there is continued academic debate about whether it really “works,” the main proof for its ineffectiveness is the lack of its widespread commercial adoption as a practice. Plenty of people could make or save billions were they able to make it rain or snow when they wanted. While desperate states in America’s southwest continue to fund cloud seeding as a practice, no evidence exists that those efforts are paying off in the form of increased precipitation, though climate change makes it tricky to establish a baseline against which to measure results.

Even flimsier evidence exists to suggest cloud seeding works to combat hail. In fact, a number of scientific studies, including one that reviews of more than 60 years’ of efforts in hail suppression, suggest that it probably doesn’t work. Very few studies have ever been done of potential negative side effects arising from, say, the increased salinity of any precipitation resulting from such efforts on the crops that growers are looking to protect.

As climate change continues to wreak havoc on wine regions throughout the world, it’s hard to fault the Wine Council of Saint-Emilion for trying something, anything to protect the livelihood of their region.

The question, of course, is whether this system (and the significant investment it doubtless entails) represent the best potential for impacting the effects of climate change in a way that benefits Saint-Emilion.

Funded by the winegrowers themselves, it certainly feels quite tangible and local, and with a target commencement date of June 2021, it has the added benefit of feeling like something that is getting done in the short term timescales that give human beings an immediate sense of progress and change.

I certainly hope it works. But I’m not holding my breath.

I’ll Drink to That: Christian Moueix of La Fleur-Petrus and Dominus Estate

Episode 422 of I’ll Drink to That! was released recently, and it features Christian Moueix, who is the president of

END_OF_DOCUMENT_TOKEN_TO_BE_REPLACED

Episode 410 of I’ll Drink to That! was released recently, and it features Philippe Newlin. Philippe is the head of