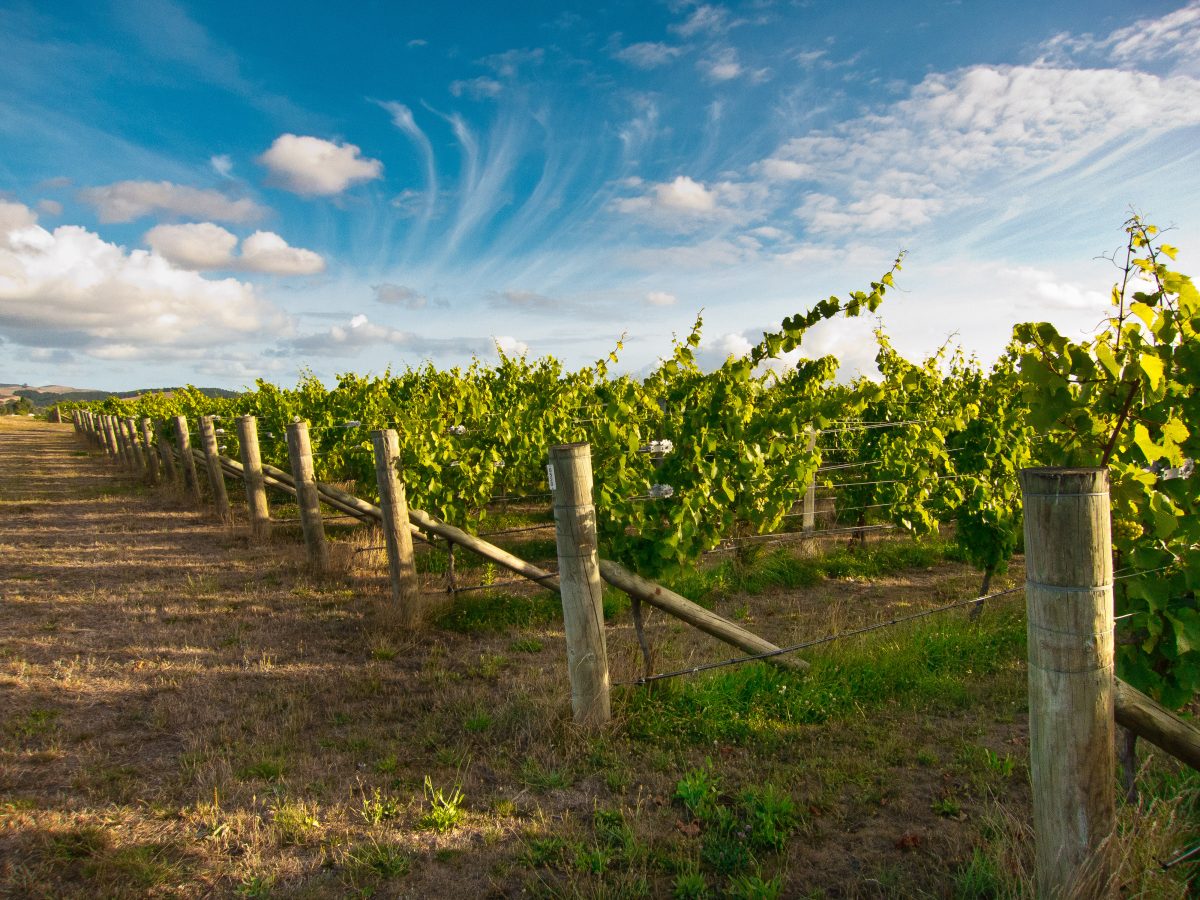 In a country filled with utterly spectacular wine regions, the Gimblett Gravels district of Hawke’s Bay can’t compete for the most picturesque. But this little patchwork of vineyards laid over the alluvium of an old stony riverbed has clearly established itself as one of New Zealand’s most distinctive terroirs.

That’s not to say, of course, that the Gimblett Gravels aren’t beautiful. The Heretaunga Plains back up against the foothills of the Kaweka mountains, and the green vineyards spread here and there, interrupted by small streams and hillocks. Like almost everywhere in New Zealand, it’s damn pretty.

But the real magic of the Gravels manifests in the wines: the spectacular Syrahs and other red wines that grow there, with their refined balance of energy, power, and freshness.

Don’t Call it an Appellation

Interestingly, the boundaries of the Gimblett Gravels district have been defined strictly based on soil geology and no other factors. While the region’s name and qualifications have been defined by private enterprise, so to speak, the district itself has been defined purely from a geologic standpoint.

Specifically, the Gimblett Gravels are three types of gravelly silt and loam laid down by the Ngaruroro River, and not the Taupo pumice sands which are the other dominant soil type nearby.

The “map” of the district has been drawn to only include these gravelly soils, and observes no other political, geographical, or property ownership distinctions, a point that the Gimblett Gravels Association likes to suggest lends something of a simple purity to their efforts. If you’ve got the soils, you’re in (provided you want to pay membership dues). If you don’t, you’re out.

There are around 1975 acres of vineyards that fall within the Gimblett Gravels zone, the vast majority of those (close to 90%) planted to red grapes, with Syrah and the Bordeaux varieties dominant.

Between the gravelly soils and the maritime climate (the region is less than 10 miles from the ocean) comparisons with Bordeaux are often made, though generally Hawke’s Bay sees milder weather than Bordeaux.

In fact, Hawke’s Bay is the warmest of all New Zealand’s wine regions, and the Gimblett Gravels might easily be described as the warmest bits of Hawke’s Bay. This shorthand, however, somewhat obscures the fact that “warm” for New Zealand is fairly temperate for most other wine regions. Compared to Paso Robles or the Douro, Hawke’s Bay still comes across as pretty cool, and you can easily find corresponding flavor signatures in the wines, especially the Syrahs.

I Could Drink a Case of You

Apparently, for the past 11 years, the winemakers in the Gimblett Gravels Association have been putting together a case of wines, selected by an independent third party (this year, it was Australian Master of Wine Andrew Caillard), to send out to journalists and critics around the world as an example of what the vintage was like in the region.

I’ve been receiving wine samples for nearly 18 years now, and this is the first time I’ve gotten a box of wine quite like this. I’ve certainly received a case of this, or a case of that, over the years. Sometimes a producer wants to send me all their wines. Sometimes a regional marketing body wants to send me a bunch of samples. Sometimes I’ve asked for a example set of wines from a particular place or of a certain style. But all those 12-bottle boxes, even when from different producers, are usually dictated by by an importer’s portfolio, or what an associations inventory of samples is at the moment. I can’t recall ever getting a collection of wines deliberately selected to be standard-bearers for an entire region and vintage where quality was the sole selection criteria.

It’s frankly a brilliant idea, especially for smaller, farther-flung wine regions that don’t necessarily get regular annual visits from a large number of journalists around the world. I’ve only managed to visit the Hawke’s Bay region twice in the last 15 years or so, and while I get an occasional sample of this or that from the region, I don’t have the opportunity to taste widely on a regular basis.

This box of 12 wines from the 2019 vintage was, therefore, a particularly appealing prospect when it arrived on my doorstep.

The 2019 vintage was pretty good, say the folks from the region. The year was mostly without incident, despite being overall warmer and wetter than average.

The growing season started with a fairly wet and warm spring, which resulted in some shatter during flowering, which reduced yields for the year by an estimated 15-20%. Summer lacked any of the damaging hail that can sometimes plague the region, though thunderstorms brought more moisture and some disease pressure as a result as temperatures warmed towards fall. As autumn progressed, things dried out nicely and the weather stayed quite temperate, allowing an unhurried harvest and excellent maturation time.

I found the wines generally to be well-balanced, with the refined tannins and good acid levels that can be achieved when winemakers get to work a harvest without much pressure.

Tasting through these bottles was frankly a delight, and made me miss New Zealand terribly. I hope to return before too long, though exactly how long that will be may be more up to COVID than it is up to me.

Be aware that in many cases, the 2019 vintage of these wines have not yet made it to America’s shores. The purchase links below, will therefore take you to any and all vintages of the wine that are for sale, including the 2019s when they become available.

2019 Elephant Hill “Heironymus” Red Blend, Gimblett Gravels, Hawke’s Bay, New Zealand
Very dark garnet in color, this wine smells of smoked meats and a touch of barnyard. In the mouth, black cherry, plum, and dusty earth flavors have a touch of leather and dashi that seem to me to be a little bit of the Brettanomyces yeast, albeit an amount that adds a grace note rather than being a dominant flaw. Nice acidity and length, and I enjoy the saline quality of the wine. A blend of 60% Cabernet Sauvignon, 29% Cabernet Franc, and 11% Merlot. Aged 25 months in 67% new French oak. 13.5% alcohol. 435 cases made. Score: between 8.5 and 9. Cost: $70. click to buy.

2019 Pask “Declaration” Merlot, Gimblett Gravels, Hawke’s Bay, New Zealand
Medium to dark garnet in color, this wine smells of plum, plum skin, and cocoa powder. In the mouth, bright plum and cherry flavors are shot through with cedar and oak along with touches of cocoa powder and cola. Good acidity and length. Spends 16 months in 50% new French oak. 13% alcohol. Closed with a screwcap. Score: between 8.5 and 9. Cost: $30. click to buy.

2019 Trinity Hill “The Gimblett” Red Blend, Gimblett Gravels, Hawke’s Bay, New Zealand
Very dark garnet in the glass, this wine smells of wet earth, black cherry, and forest floor. In the mouth, savory notes of earth and black cherry mix with cola and licorice as faint, powdery tannins add texture and muscle. Excellent acidity. A darker brooding flavor profile, but with elegance thanks to the acidity and faint tannins. Lovely dried herbal notes linger in the finish. A blend of 54% Cabernet Sauvignon and 43% Cabernet Franc and 3% Tempranillo that spends 20 months in 53% new French Oak. 13.5% alcohol. Closed with a screwcap. Score: between 8.5 and 9. Cost: $25. click to buy.

2019 Squawking Magpie “The Nest” Red Blend, Gimblett Gravels, Hawke’s Bay, New Zealand
Medium to dark garnet in the glass, this wine smells of cherry and plum with hints of cola nut. In the mouth, cherry and tobacco notes mix with cola and a touch of plum skin amidst bright acidity and the faint grip of powdery tannins. Bright and tasty. A blend of 58% Merlot,17% Cabernet Franc, and 25% Cabernet Sauvignon aged in 30% new French oak for 18 months. 13.9% alcohol. Closed with a screwcap. Score: around 9. Cost: $30. click to buy.

2019 Mission “Jewelstone” Syrah, Gimblett Gravels, Hawke’s Bay, New Zealand
Medium to dark garnet in color, this wine smells of blackberry and dried herbs with a touch of white pepper. In the mouth, silky-textured flavors of blackberry and white pepper mix with dried herbs and a touch of licorice root. Excellent acidity and the finest, powdery tannins that can barely be felt round out the package. Elegant, with the white pepper and herbs dominating the finish. Spends 12 months in 23% new French oak. 14% alcohol. Score: around 9. Cost: $40. click to buy.

2019 Esk Valley Red Blend, Gimblett Gravels, Hawke’s Bay, New Zealand
Dark garnet in color, this wine smells of cherry, plum, and crushed stones. In the mouth, wonderfully stony flavors of cherry, plum, and a touch of earth are wrapped in a faint fleecy blanket of tannins. Wonderfully stony, with bright acidity keeping the fruit fresh and snappy. A blend of 47% Merlot, 38% Cabernet Sauvignon, and 15% Malbec fermented in concrete and aged in 10% new French Oak for 12 months. 14% alcohol. Closed with a screwcap. Score: around 9. Cost: $20. click to buy.

2019 Esk Valley “Great Dirt River Gravels” Red Blend, Gimblett Gravels, Hawke’s Bay, New Zealand
Dark garnet in color, this wine smells of black plum and black cherry. In the mouth, cherry, blueberry, and cola flavors are wrapped in a light suede blanket of tannins as excellent acidity brings a nice citrus peel note to the wine. Faint herbal notes linger in the finish with a beautiful roasted and candied nut quality. A blend of 39% Merlot, 31% Malbec, and 30% Cabernet Sauvignon aged for 19 months in 45% new French oak. 14% alcohol. Closed with a screwcap. Score: between 9 and 9.5. Cost: $40. click to buy.

2019 Craggy Range “Gimblett Gravels Vineyard” Syrah, Gimblett Gravels, Hawke’s Bay, New Zealand
Dark purple in the glass, this wine smells of blueberries and white pepper. In the mouth. Juicy and bright blueberry, blackberry, and white pepper flavors have fantastic acidity and a stony minerality that is really very pretty. Faint, powdery tannins have a wispy quality, hanging back and letting the fruit do the talking. 100% Syrah aged for 14 months in 25% new French oak. 13.3% alcohol. Closed with a screwcap. Score: between 9 and 9.5. Cost: $30. click to buy.

2019 Craggy Range “Le Sol” Syrah, Gimblett Gravels, Hawke’s Bay, New Zealand
Very dark purple in color, this wine smells of blueberries, smoked meats, wet stone, and a hint of white pepper. In the mouth, deeply stony flavors of blueberry and blackberry are juicy and bright with excellent acidity and a touch of the sourness of unripe blackberries. Faint, powdery tannins hang in a haze through the mouth as blackberry and a touch of sour cherry linger in the finish. 100% Syrah that spends 17 months in 38% new French oak. Excellent. 13.5% alcohol. Closed with a screwcap and in a heavier bottle than it needs to be, weighing 1.6 kg when full (as opposed to their normal bottle, which weighs 1.3 kg full). Score: between 9 and 9.5. Cost: $90. click to buy. 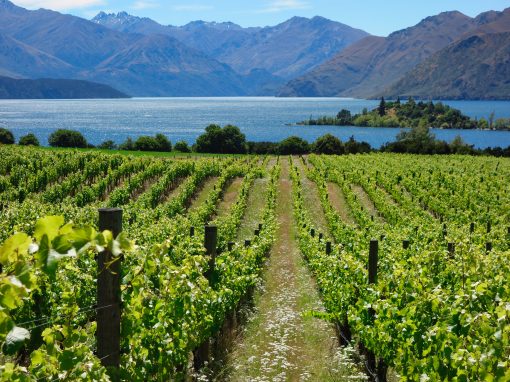 When I was first learning the little bit of Japanese that I speak, I was interested in adjectives. Maybe it’s

END_OF_DOCUMENT_TOKEN_TO_BE_REPLACED 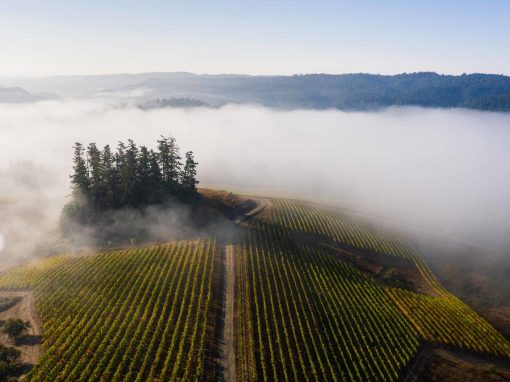 A Voice From the Fog: Current Releases From Peay Vineyards