Wine Critics are Parasites, But That Doesn’t Mean We Can Be Bought 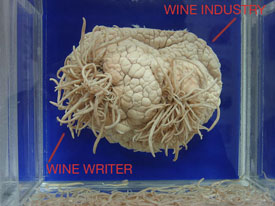 One of the world’s leading wine critics has just proclaimed that wine writers, journalists, and critics are all parasites. According to Decanter magazine, while being paid to hang out in a plush cliffside hotel in Ronda, Spain, Jancis Robinson took a moment out from tasting some of the world’s best wines to admonish her fellow journalists, “We must always remember that we are parasites on the business of winemaking.”

1 : a person who exploits the hospitality of the rich and earns welcome by flattery
2 : an organism living in, with, or on another organism in parasitism (in which one benefits at the expense of the other, without killing it)
3 : something that resembles a biological parasite in dependence on something else for existence or support without making a useful or adequate return

Is she right? Pretty much.

Every wine critic or journalist has their own particular set of ethics, but most enjoy at least some fruits of their power (however limited in scope or narrow in focus) as commentators on a luxury industry. Whether that means keeping wine samples for their personal cellars, going on press junkets to wine regions, getting taken out to lunch by winemakers, or simply access to places and products that ordinary people would have to pay for.

But just because we’re parasites, that doesn’t mean that we can be bought! You can give us $1000 bottles of wine to taste, but you can’t give us Cartier watches. That’s just too much, apparently. Even parasites have some sort of scruples.

All sarcasm aside, I’ve personally found negotiating my relationship with “the industry” tricky, to say the least. In figuring out what my own personal ethics are as a journalist, I’ve had to deal with a number of realities that all wine journalists must face:

1. Writing about wine doesn’t pay worth a damn, which makes the free meals, free wine, and special treatment easy to imagine as “payment in kind” for our work.

2. Because we wine writers are generally poor, we can’t afford to go out and buy all the wines we want to taste, nor can we always afford to pay our way at tastings, trips, conferences and the like — the very things that provide the experience and knowledge we need to write better stuff.

3. We are the main vehicle that all but the largest wineries have for marketing themselves to a broad audience. Most wineries have little or no marketing budget, so all their exposure is usually through the press and word of mouth. Which means they want to treat us really well.

4. No matter what level of objectivity we seek to achieve, there’s no way of avoiding personal relationships with folks in the industry. It doesn’t help that many of them are nice, rich, super generous, and completely awesome to hang out with, not to mention the fact that they are pretty big fans of the thing that we are most passionate about.

So it’s no surprise, really, that wine magnate Bernard Magrez sent journalists home from lunch at (Michelin three star) Alain Ducasse in Paris with a goody bag that included a limited edition, engraved Cartier watch. I guess it is somewhat surprising, though, that after letting him pay for lunch, and doubtless a few bottles of amazing wine, those same journalists would be outraged at the gift.

If you’re gonna be a parasite, what’s the difference between a free meal and a free watch? I’ll bet the lunch cost more than 30% the value of the 1500 Euro watch that is causing such a commotion.