For Pete’s Sake, Don’t Throw Out That Wine! 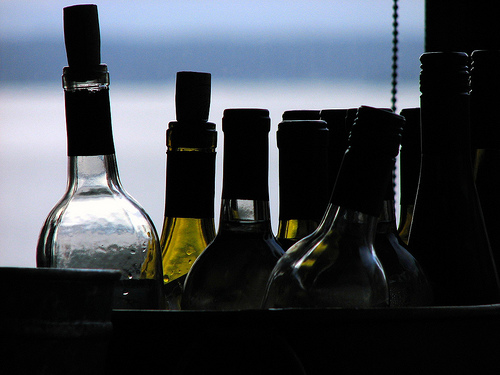 : UK consumers throw away around 50 million liters of wine per year, valued at around $726 million.

That’s a lot of wine being poured down the sink.

The British supermarket chain that reported this statistic, presumably from some study they had done, suggests that it is due “in part, to Brits not knowing how long it stays fresh in open bottles and too much wine being served at a time.”

Leaving aside for the moment the fact that the people reporting this statistic are purveyors of bag-in-the-box wine that combats this very problem, let’s assume for a moment this is actually true, and that consumers everywhere (at least those with options for refrigerating their wine) have the same issue.

Either people are tossing out wine too early, for fear that it has gone bad, or they’re keeping it too long without finishing it and finding that it has indeed gone bad.

Care to hazard a guess which is more likely? I’m not sure myself, but if I had to put my money on one, it would be that people are throwing out a lot of perfectly good wine.

I’m not infrequently asked how to store opened wine, and also continue to come across friends who express surprise to see me (or to be instructed by me to) put the cork back in a bottle and throw it in the fridge. Red or white, it doesn’t matter.

This is by far the most common way I store wine for later consumption. If I were richer, and a little more organized about such things, I’d buy inert gas canisters and spray some of that into my better bottles to displace the oxygen before putting the cork in to make sure the wines lasted the longest, but really, I can’t be bothered (not to mention paying eight bucks for a can that feels like it has nothing in it still makes me feel a little weird). At any given time I’ve got several bottles in the door of my fridge at home.

Keeping wine in the refrigerator is quite important if you want it to last once opened. The chemical reactions, that take place to spoil wine, especially those involving living organisms like bacteria and yeasts are dramatically slowed by cooler temperatures. Oxidation, on the other hand, can be slowed by the aforementioned dose of Nitrogen or Argon, or by simply keeping an empty half-bottle and a funnel around and pouring it full of the leftover wine, thereby dramatically reducing the amount of oxygen that can come into contact with the wine.

But let’s get back to the basics: push the cork back in, and throw it in the fridge.

I’ve tried those mechanical vacuum sealers and pumps of different kinds and I don’t think they really make much of a difference over the course of time. Don’t waste your money or your time — though the little rubber stoppers you get with them can be handy.

As for how long wine will keep with the cork shoved back in the bottle (or that screw cap re-threaded): a lot longer than some people think.

I tend to keep white wines (and pink ones) re-corked in the fridge for sometimes up to three or four weeks. Yes, at week four I can often taste some oxidation, but most white wines are still quite drinkable even at that stage. Sadly Champagnes don’t last nearly that long, but as someone once put it to me in outrage: “what on earth would make you not want to finish a bottle of Champagne once it was opened?” A very good question, indeed.

Red wines are a different story, as they oxidize much quicker than white wines. How long a red wine will last in the fridge seems to be much more variable, and in my experience dependent upon the winemaking. Without getting into a whole digression here about what makes some wines able to age much longer than others, suffice it to say that the wines most likely to last decades in your cellar are those most likely to last weeks in your fridge.

I recently “lost” a bottle of red wine in my fridge (OK, so I mostly just ignored it in favor of other wines for weeks) and found it in remarkably good shape after more than three weeks. At that point the blend of Pinot Noir and Pinotage tasted like it was 10-years-old, but it was quite surprisingly still in fine shape. It made me think I ought to buy a case of it and throw it in the cellar for a long time.

That bottle is an extreme case however. Usually my reds last about a week before they show noticeable signs of oxidation. Some I can continue drinking for another week, others are pretty much kaput on day seven. It’s always luck of the draw, and in my house I have the luxury of having a lot of other wines around if one opened bottle from last week turns out to be over the hill.

But the short story is that keeping leftover wine to drink later is a pretty simple proposition that merely involves remembering not to throw out that cork (or screw cap) once you remove it. And perhaps reminding yourself to not pour the remains of that bottle down the sink after all.